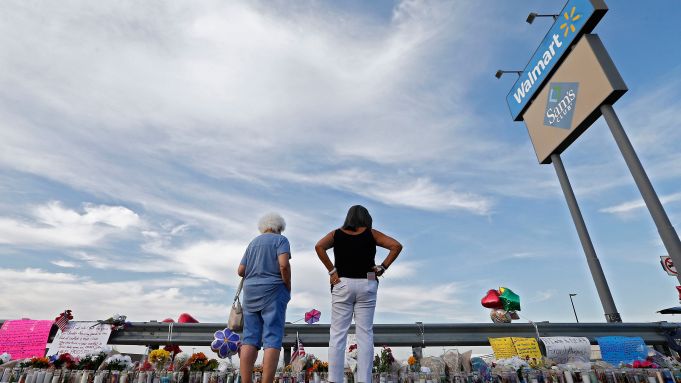 The late-night shows took on a more somber tone tonight as the comedians examined this weekend’s mass shootings in El Paso, Texas and Dayton Ohio, which claimed at least 31 lives.

“I think at this point it is clear that America’s gun culture is melting down,” Stephen Colbert said on CBS’ Late Show. “But the Republicans in Congress would rather maintain their power than save lives.”

Colbert then urged the nation’s political leaders to take action before more lives are lost to gun violence.

Meanwhile Jimmy Fallon opened NBC’s Tonight Show in a darkened studio and admitted “it’s tough to know what to say after something like this.”

He noted that the shooting in El Paso is being investigated as a hate crime, and offered words of support to anyone facing discrimination.

“To anyone whose background has made them a target of prejudice or hate or violence, or anyone who feels that they may not be welcome in this country. Know that you are welcome,” Fallon said. “We support you, and we love you, and the cycle of hate needs to stop.”

Seth Meyers began by expressing sympathy for those affected by the shootings.

“This was a heartbreaking weekend of unspeakable tragedy, and yet one that disturbingly feels all too familiar,” Meyers said on NBC’s Late Night. “As we all know by now, there’s an epidemic of gun violence and mass shootings in this country, and no matter how difficult, we cannot become numb to it.”

“This is a moment that demands moral clarity and urgency from our political leaders,” he said.

Seth takes #ACloserLook at the tragic shootings in El Paso and Dayton over the weekend. https://t.co/hyt9NexbR5

Over on Comedy Central’s Daily Show, Trevor Noah mentioned Neil deGrasse Tyson’s controversial tweet saying more people are killed by the flu and car accidents than mass shootings. After lambasting Tyson, Noah said the nation should regulate guns just like it does cars and travel.

“To get a car, you need a license, you need to go through a process because we just want to minimize the chance of people dying in a car,” he said, adding that after 9/11 the country created the TSA and “locked that shit up hard.”

Noah went on to call for more controls on gun sales.

“You only want people who are willing to respect a gun to own a gun,” he said. “You want to make it as hard as possible.”

Over on ABC, an indignant Jimmy Kimmel called out members of the Republican party.