WME Partners Finally Got To Sell 20% Of Endeavor Stock This Week, And Many Took Advantage
Read the full story
July 3, 2020 2:14pm
1Comments 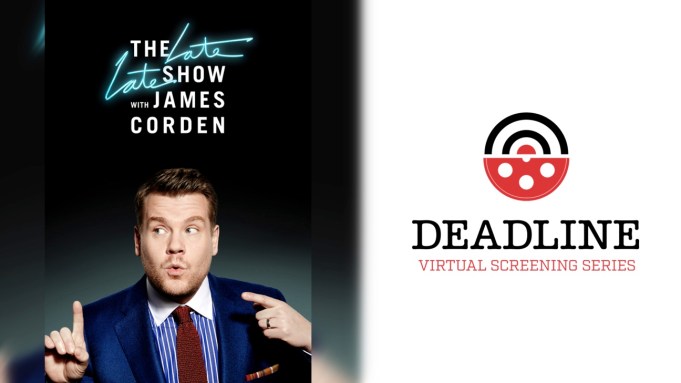 It is hard to keep up with all the awards coming James Corden’s way. His CBS series The Late Late Show with James Corden just celebrated its fifth anniversary in March and over that time has racked up 21 Emmy nominations and seven wins in multiple categories from Variety Talk Series to Variety Special, Writing, Directing, Interactive, Short Form, even Choreography. Last year alone, Corden was the most-nominated individual performer with seven overall. Since the coronavirus shut down shooting in front of live studio audiences, a lifeblood for shows like his, Corden has re-invented the format to work directly from his garage, where he basically does it all in solitary, of course with the great remote assist from his writers, producers, band and crew. On Thursday, Corden appeared for an in-depth look at his show at the Deadline Virtual Screening Series. We showed some remarkable clips from the season that ranged from the seriousness of events that have led to where we are now to some inspired comedy and musical segments, to his riposte to Bill Maher’s fat-shaming episode. Here are some highlights of our conversation.

ON PUTTING ON A SHOW IN HIS GARAGE:

“I do the show completely on my own in here every day, so the lights get turned on remotely, and then I walk in, but there’s a curtain just over here, and behind that curtain is a fridge/freezer which is covered in so many blankets to hide the noise, you know? So if you need to get something from the freezer in the garage, you really have to ask yourself whether it might be quicker to drive to the store before you go through the stress of taking off all of these soundproof blankets. So, behind that curtain, it doesn’t look great. I promise. … It’s been almost four months, three and a half months we’ve been doing the show in here. Yeah, it’s a challenge, you know? It’s just been such a challenge, it really has, all of it.”

ON CLIPS LIVING ON BEYOND THE SHOW ITSELF:

“So, you know, look, that was our plan from the off. We said if it’s good, people will find it. I think on YouTube alone, it’s, like, 8 billion views. So, in total, it’s almost 9 billion views that the show has had in five years, which brings with it an incredible sort of of revenue stream for the network that I don’t think they ever knew was there perhaps. You know, to make a show like the Carpool Karaoke spinoff series that we are overwhelmed to have won Emmys the last couple of years for that show as a spinoff or spinning a show off Drop the Mic. It’s kind of an incredible breeding ground where we can sort of formulate these ideas and if they’re good, they’ll travel, you know? Like, I think the Paul McCartney clip has been watched, like, 155 million times in a week, and then it also means that, because of those clips, the show then plays in other territories. So when we launched The Late Late Show, we were on in, I think … I might get this wrong, but I think we were on in eight or 10 countries, and now I think we’re on in, like, 152, and a lot of that is in response to the clips online and stuff. So it’s a thrilling time to make a TV show because, historically, these shows were disposable. They were there, and then they were gone, and now they’re there, and they live forever.”

ON HIS PRIMETIME HOMEFEST SPECIAL EARLY IN THE PANDEMIC:

“When we realized that this is how we’d be making our show, and before we had all these ideas for our fifth-anniversary special, obviously that went away, and so CBS had very kindly given us this sort of prime-time hour, and we were like we obviously won’t be able to do that. But if we could have that hour maybe in a week’s time, we might be able to deliver a show for you, and we just started thinking about the incredible thing about this virus, this pandemic, is really, many, many of us are in the same boat. We’re just at home, I wonder if we could make a show around that … and we called it Homefest, bringing people together to keep them apart, and I think it was in the second or third week of COVID-19. And we thought, well, I wonder if we could go to all the biggest artists in the world and they would perform from their homes, and I would be in my home talking to you in your home, and what we really wanted to say was that it’s okay to feel any of the things that you’re feeling right now. It’s all right. It’s okay, and that’s kind of the thing I keep thinking about with this sort of period of lockdown, really. And so we wanted to make a show that basically says that I know you feel like you’re on your own, but you’re not. I think we jumped into that term social distancing a little too soon, and I think we should’ve called it physical distancing because, actually, I’ve never felt more connected with so many people, my family back at home, friends of mine back at home.”

“You can’t just stand still. You’ve really got to evolve before your audience does, and so, over the past few years, I have felt a lot more comfortable talking about things, and then the thing on our show, our sort of rule is we’ll talk about anything. We’ll talk about anything if we feel passionately that we absolutely have something to say. What we don’t want to do is only talk about one thing, you know?…I said to Reggie, look, I’m going to come to you and talk to you about it, you know? And Reggie said cool. That was it. That was the exact conversation. Well, I’m going to come to you and talk to you about it. Cool, and I think it was the most honest…certainly, the most honest moment in the five years that we’ve been on the air. I’ve struggled to find a more honest moment in late-night shows because it was completely organic and raw, and Reggie just started talking, and then you just…you saw it, just…the emotion of the moment just falling from him, and I honestly think it has changed in the most positive way, I think it has changed how we make the show in a way.”

Among other topics Corden discussed was the amazing Crosswalk Musical of Les Miserables the show pulled off in Paris. Also there was the Kanye West Karaoke segment that was staged on an actual airline flight with his full choir as Carpool Karaoke became Airpool Karaoke. He also discussed how Michelle Obama called the show to suggest an epic game of dodgeball that turned into an all-star faceoff between Team USA, with her leading a lot of familiar faces, and Team UK, with the likes of Benedict Cumberbatch and led by Corden, and so much more.

Corden prides himself on not really doing a standard TV talk show. It really is a variety show staged five nights a week and for that it holds a unique place in the late-night club.

To watch some of our conversationm just click the link above.