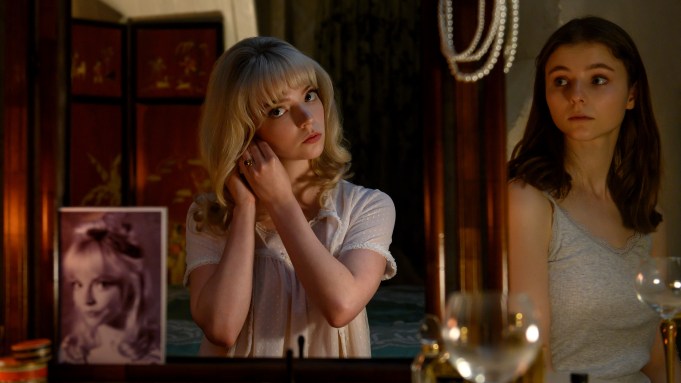 Focus Features has released the official trailer for Last Night In Soho, Edgar Wright’s psychological thriller that just had its world premiere at the Venice Film Festival. It comes ahead of a planned October 29 release in theaters.

Written by Wright and Krysty Wilson-Cairns, Last Night In Soho stars Thomasin McKenzie as Eloise, an aspiring fashion designer who is somehow able to enter the 1960s where she encounters a dazzling wannabe singer, Sandie (Anya Taylor-Joy). But the glamour is not all it appears to be and the dreams of the past start to crack and splinter into something far darker.

Wright, who is coming off this year’s documentary The Sparks Brothers with his first narrative feature film since 2017’s Baby Driver, took to Twitter ahead of Soho‘s Lido world premiere on Saturday (read Deadline’s review here) to plead with the gala crowd not to spoil the movie for others, writing that the cast and crew “would love to ask you, our first viewers, to keep the secrets within so that others can discover them later. When writing about the film, we’d love everyone who sees it to discover the story along with Eloise. So, please, if you can, keep the experience intact for future audiences so that what happens in ‘Last Night in Soho,’ stays in Soho….”

He said: “In ‘Last Night in Soho,’ our heroine Eloise goes on a journey. First from the country to the city, and then to another time. I would love the audience to go on that journey too when the film opens on October 29th. We purposely pushed the film back to this autumn date, not just so that it can hopefully be enjoyed on the biggest screen possible, but also so the nights would be longer and the audience could go in cold… literally.

Here it is! A new trailer for my movie #LastNightInSoho. However, if you are already sold and would prefer to know NOTHING more of the secrets within, then avert your eyes now… Otherwise, please enjoy! Either way, I’ll see you in the dark of the cinema on October 29th x pic.twitter.com/M9vMvDVXLb

The pic has had a few release dates that have been impacted like most everything else in exhibition by the pandemic. It previously had set a September 25, 2020 date, before being pushed to April 23, 2021 and then into the fall.