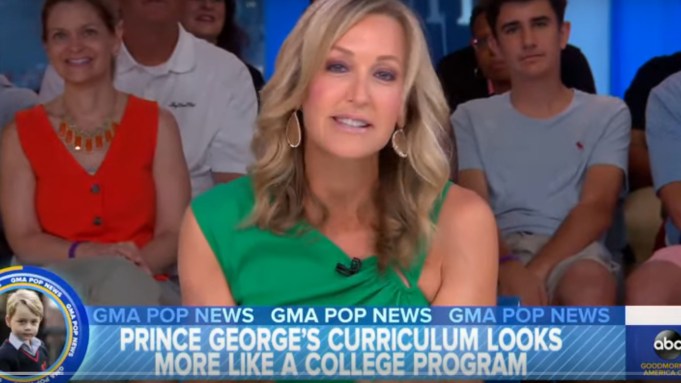 Good Morning America‘s Lara Spencer has apologized for a comment she made on-air Thursday about little Prince George taking ballet, but the sorry won’t erase some harsh social media takedowns coming from stars of Hollywood and Broadway. “Darling,” said actress-dancer-producer Debbie Allen in a video message, “you’re not on Saturday Night Live.”

Broadway choreographer and director Jerry Mitchell (Kinky Boots, Pretty Woman) responded with an instant classic of his own: “Laura, really? Some of us take ballet. Some of us win Tony Awards because we took ballet. Miss Thing, it’s 2019! Get a life!”

See those responses below, along with messages from Rosie O’Donnell, Broadway’s Tony Yazbeck and Michael Cerveris, Dancing with the Stars veteran Derek Hough and So You Think You Can Dance‘s Travis Wall, among others.

Spencer drew the ire after making a comment during the Thursday segment in which she talked about Prince George’s demanding curriculum, suggesting it was more like a college program.

“In addition to the usual first- and second-grade things like math, science and history, the future King of England will be putting down the Play-Doh to take on religious studies, computer programming, poetry and ballet, among other things,” Spencer said, pausing and prompting laughter from the audience. “Prince William says Prince George absolutely loves ballet. I have news for you, Prince William: We’ll see how long that lasts. I mean, he might! He might end up … Between the religious studies and the computer programming, I just want to go back to the Play-Doh!” You can watch the video above.

No surprise, Spencer got some swift social media backlash, with some calling her a bully and many sensing a “boys don’t dance” mocking tone to her remarks.

The dancing community took special note, with Hough expressing disappointment on Instagram. “For a brief moment it brought up old unpleasant memories of being mocked and laughed at for being a boy who danced…”

“My sincere apologies for an insensitive comment I made in pop news yesterday. From ballet to anything one wants to explore in life, I say GO FOR IT. I fully believe we should all be free to pursue our passions. Go climb your mountain-and love every minute of it,” Spencer wrote.

My sincere apologies for an insensitive comment I made in pop news yesterday. From ballet to anything one wants to explore in life, I say GO FOR IT. I fully believe we should all be free to pursue our passions. Go climb your mountain-and love every minute of it.

DEAR @lara.spencer of GOOD MORNING AMERICA. I have a message for you. Wake up. It’s 2019. Get with the program. Please share and repost this so a boy who needs to see this feels supported if he dances or wants to! #boysdancetoo #ballet #goodmorningamerica #traviswall #laraspencer #bully

I saw a clip from goodmorningamerica this morning and I was pretty surprised by the tone of some comments towards dance. My initial response was disappointment. For a brief moment it brought up old unpleasant… https://t.co/6sk5nwoII1

Lara Spencer on @GMA mocked a 6-year old Prince George of the UK for taking ballet class. It shows that “toxic masculinity” can be spread viciously by insensitive women, too. As a fellow “George” and a lover of dance, I am very troubled and disappointed by her actions.

Ok just watched the clip. Yeah @LaraSpencer seriously there’s no excuse. That’s what you want to teach our kids? That ballet is laughable? Really? Please bring me and all my amazingly gifted male ballet dancer friends on your show so we can school you into reality. 🤦🏻‍♂️

Dear @LaraSpencer as long as Prince George doesn’t grow up to be a mocking, boorish, condescending, insensitive, sexist, child shaming, poor excuse for a ‘reporter’ and person, I think Prince William and The Duchess… https://t.co/27NIlAQoLr

Hey @LaraSpencer, I’m a boy and I love ballet. Dancing as a child with @NationalDance Institute changed my life for the better in so many ways. My father and I also love going to @nycballet together for the music, costumes, and incredible athleticism.

Shame on @LaraSpencer and @GMA – where is the apology !?

I WISH I had taken ballet!!!! (Dance your heart out, Prince George!!)

To all the boys out there who have felt discouraged by comments like these, know that I support you, I’m rooting for you and you inspire me! 5/5