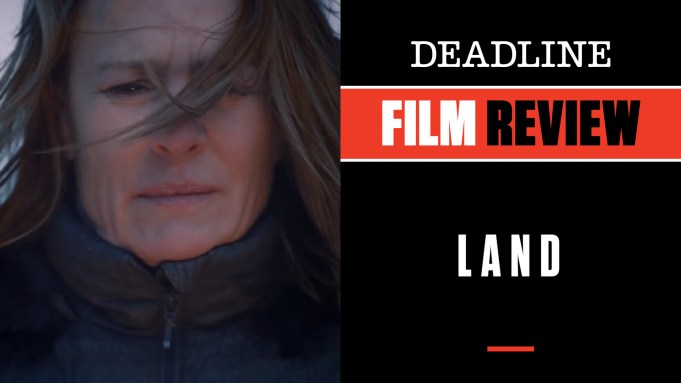 Robin Wright takes on directorial and starring roles in Focus Features’ Land, which had its world premiere in the Premieres section of the Sundance Film Festival on Sunday.

Wright is no stranger to being behind the camera having directed 10 episodes, including the series finale, of House of Cards, but for her feature directorial debut she really has upped the stakes and taken on a challenging project, both logistically and in terms of a starring role that is emotionally draining. She succeeds impressively on both counts. She says she was inspired to take on those challenges by what she felt was a need for a movie that emphasized our own goodness and humanity in a time rocked by mass shootings and ugliness brought about in the Trump era. We can use it.

Land comes from screenwriter Jesse Chatham and was a finalist in the Motion Picture Academy’s Nicholl Fellowship Screenwriting competition, and he is credited for the final script with Erin Dignam. In it, Wright plays Edee, who as we meet her talking to her therapist we can tell this is a person who is going through some very intense emotional curves in her life. Soon she is arriving alone at a rundown cabin in the middle of the wilderness on top of a mountain and surrounded only by Mother Nature. She is clearly distraught, almost suicidal it seems, as she goes about moving into this isolated place. It goes downhill rather quickly as her supplies run out and the weather worsens; her situation seems dire.

Into her life, in just the nick of time, comes Miguel Borras (Demián Bichir), a local man accompanied by a woman who, in an unqualified act of kindness, rescues Edee from certain death and slowly brings her back to life. They become friends as he makes frequent visits, helps her adjust to these unique surroundings including learning to shoot and get her own food, dealing with bears and other creatures, and making it through the changing of each season. We watch as Edee becomes a survivor, a person who was running from a horrendous family tragedy and running also from herself, grief nearly drowning her, and now a chance at rebirth and a new life.

Oddly coming in the same season as Nomadland, this Land is also about someone essentially turning away from their domestic world and moving to an uncertain future. Instead of Frances McDormand’s character wandering the land, though, Edee is someone who, in a move of desperation and retreat, is focused on one place. Both women essentially are running from something, but Edee looks slowly to find her new life in an environment in which she can settle down, a new world where only the seasons change, not the home.

Wright is, and always has been, a fine actress, and in this role we get to see her taking on challenges like never before. It is largely an interior performance, one of long silences and rooted in what we see in her eyes, on her face. She is extraordinary. Bichir is her equal in a supporting role, a genuinely kind man helping a total stranger and putting his own humanity on full view. Their budding friendship is reassuring in this day and age, the power of human kindness the whole point.

Check out my video review above with scenes from the film. Do you plan to see Land? Let us know what you think.