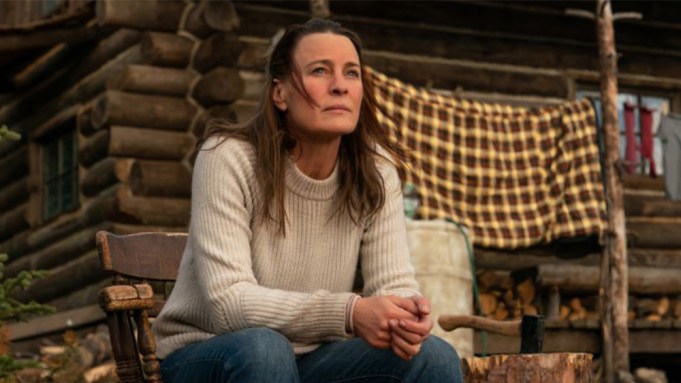 EXLCUSIVE: Robin Wright stars and makes her feature directorial debut in Land, which is gearing up for its world premiere Sunday at the Sundance Film Festival. We have a first-look clip from the pic, in which she stars with Demián Bichir in the story of one woman’s search for meaning in the harsh American wilderness.

Focus Features has rights to the pic which after its Sundance run will hit theaters February 12, with a Premium VOD window also in the works.

Wright, who previously directed several episodes of Netflix’s House of Cards, here plays Edee, who following a life-changing event finds herself unable to stay connected to the world she once knew. In the face of that uncertainty, goes off the grid in the stunning but unforgiving wilds of the Wyoming Rockies. After a local hunter (Bichir) brings her back from the brink of death, she must find a way to live again while building an unexpected friendship along the way. Kim Dickens also stars.

Over the weekend during the film’s panel at Deadline’s Contenders Film awards-season event, Wright talked about what drew her to Jesse Chatham and Erin Dignam’ script, which was a finalist for the Movie Academy’s Nicholl Fellowship Screenwriting competition.

“It resonated with me,” she said in the conversation that included her co-star Bichir. “At its heart it is about friendship and human kindness. The last four years have provided so much ugliness. The world needed to see the beauty in the humans that we are.”

Land bows in the festival’s Premieres section on Sunday at 3 p.m. PT.