DGA Says They Won't Be First Guild To Bargaining Table: "Studios Are Not Yet Prepared To Address Our Key Issues"
Read the full story
January 12, 2022 1:14pm 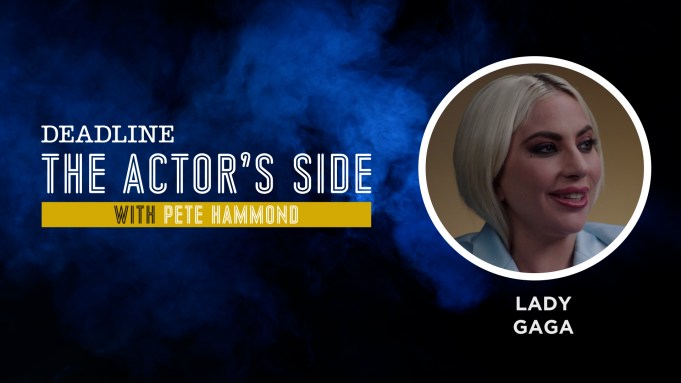 Did you know Lady Gaga set out to be an actor before she ever made it as a singer? That is just one of the revelations that came out my conversation with the superstar for this week’s edition of my Deadline video series The Actor’s Side in a wide-ranging interview on the occasion of her much acclaimed performance as Patrizia Gucci in House of Gucci. The role earned her two SAG Award nominations this morning as Lead Actress and as part of the ensemble cast. She was also awarded the New York Film Critics Circle Best Actress honor this year.

To say Gaga’s acting career is now humming along on the same level of her musical career may be an understatement. But as she tells me, “I always wanted to be an actor before a singer,” and in fact studied for a decade at the Lee Strasberg Institute where she developed her process and penchant to embrace the Method, though she says there are many different definitions of what that actually is.

We talk in detail about her experience playing Patrizia , the woman who was convicted and spent many years in prison for arranging a hit on her husband, the head of the Gucci empire. She is now out of prison, but Gaga refused to meet with her to discuss the role, instead choosing to go her own route and bring a  sense of authenticity to it rather than be influenced by Patrizia’s own agenda.

Gaga has high praise for director Ridley Scott and particularly in letting the complexity of the character shine in the final edit.

“I have a very romantic relationship with the characters I play,” and that includes her Oscar-nominated role in her breakthrough movie A Star Is Born in which she co-starred with Bradley Cooper, who also directed. She tells me how the subtle homage to 1954 A Star Is Born star Judy Garland came about, and talks about working with Cooper.

Other topics we hit include doing the American Horror Story series with Ryan Murphy, as well as her opinion on awards. She has won more than a few already including an Oscar for Best Song, “Shallow” from A Star Is Born. And yes Tony Bennett, her partner on a new album and TV special, also is discussed. Lady Gaga tells me she is always learning, “I will die being a student,” she says.

Check out our conversation above to get the “actor’s side” of things from Lady Gaga.

Join me every Wednesday during Oscar season for another episode of The Actor’s Side.