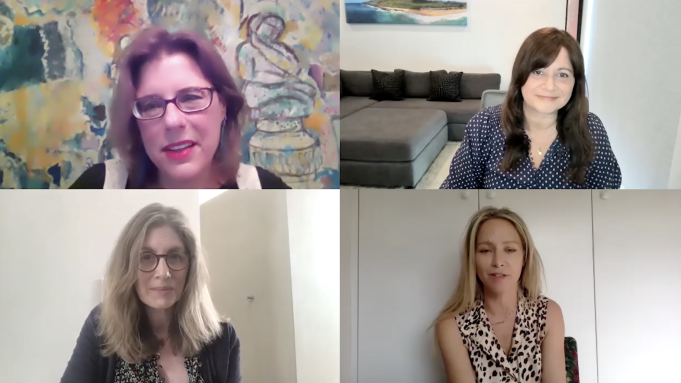 Powerhouse celebrity author Jackie Collins’ 30-plus novels have sold more than 500 million copies and the writer, the younger sister of actress Joan Collins remained a ubiquitous public persona radiating power and confidence up to the last (she died of breast cancer in 2015 at age 77). The poignant documentary Lady Boss: The Jackie Collins Story looks behind the big hair, big jewelry and big shoulder pads, Collins’ protective suit of armor, to the private woman.

“I knew the public persona, the Jackie Collins we all knew. I wanted to look at what was going on behind that,” director Laura Fairrie told Deadline’s Tribeca Studio, where she was joined by Collins’ daughters Rory Green and Tiffany Lerman. The “behind” included often intense sibling rivalry, some very toxic relationships, and the exhaustion of facing down with aplomb a constant parade of critics. Her steamy exploration of female sexuality made her among the most beloved and most attacked authors of her day for a canon that includes Hollywood Wives, The Stud, The Bitch and The World Is Full Of Married Men.

Collins, Fairrie said, “was my sex education teacher as a teenager.”

“To do her justice we needed to show her in all her vulnerability as well as her strength.” Fairrie’s previous films have tackled subjects from European antisemitism (Spiral) to British politics (The Battle for Barking).

Lady Boss weaves interviews of family members, friends and colleagues with footage of Jackie at home with her children, on talk shows with often skeptical male hosts, at readings and book signings mobbed with adoring fans. “We discovered a more dimensional story than even we had imagined. It was painful and moving and we feel even closer to her,” said Rory Green. “She was a person who kept picking herself up.”

Collins left a huge archive, Tiffany Lerman said. “She gave so much to so many women. There were so many bits to her life. It was so important for us to have her story told.”

Eight of Collins’ books were adapted for film or television, including the Lucky Santangelo series. The author was an especial hit in Hollywood where she joined her sister, tried a bit of acting herself, but mostly searched for fodder for her novels. “London was her home, her heart, her childhood,” said Fairrie. “But LA was the drama and I just love the way that she embraced it and adored it and wrote about it.”

Lady Boss: The Jackie Collins Story debuts today at the Tribeca Festival at 5PM ET. Watch the full interview above.

The Deadline Studio is presented by Verimatrix.