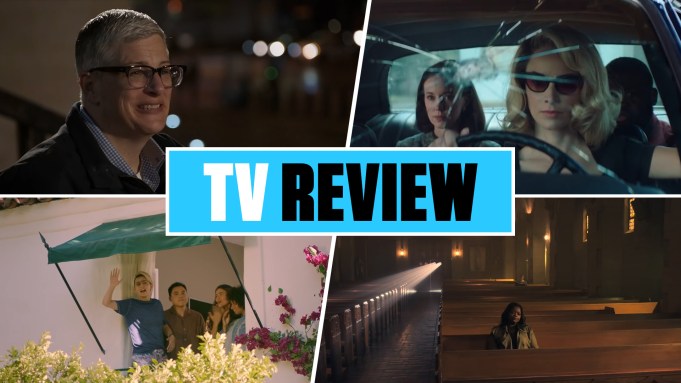 Christmas is still weeks away, but there are a few presents under the small screen tree that you really should open this week.

Yes, there’s the return of Amazon’s The Marvelous Mrs. Maisel for its lush third season tomorrow, the CW’s December 8 premiering supersized annual Crisis on Infinite Earths team-up and Fox’s fun in the dysfunctional Denis Leary-led The Moodys holiday miniseries, which debuted last night and continues next week. However, when it comes to the show that you have to watch this week, we’ve got a quartet of newbies of sorts to pick from – as you can see in my review video above.

Showtime has a double shot lined up for December 8 with the kick-off of The L Word: Generation Q and Work In Progress.

Jennifer Beals, Katherine Moenning and Leisha Hailey are back, and yet the revival of the groundbreaking Ilene Chaiken-created lesbian drama that ended 10 years ago is very 2019 this time round. With new cast members in Rosanny Zayas, Arienne Mandi, Sepideh Moafi, Grimm alum Jacqueline Toboni and Leo Sheng as a trans man coming to terms with issues internal and external, showrunner Marja-Lewis Ryan’s Generation Q mixes the generations and classes in L.A.’s LGBTQIA community and beyond.

On almost the other side of the country and after a straight to series success out of the Sundance Film Festival earlier this year, the Chicago-set Work In Progress is also very much of this time and place in America. Co-created by star Abby McEnany with pilot director Tim Mason, this tale of a 45-year-old self-identified, fat, queer dyke is co-written and EP’d by Matrix and Sense8 director Lilly Wachowski and co-stars SNL alum Julia Sweeney. Having a very busy year, Theo Germaine of Netflix’s The Politician is a special guest star in the eight-episode first season of the comedy series.

If December 8 sees Showtime rolling doubles, December 6 has the launch of AppleTV+’s Truth Be Told and the dropping of the entire 10-episode first season of Hulu’s Reprisal.

Starring Oscar winner Octavia Spender and multiple Emmy winner Aaron Paul the Reese Witherspoon produced and Nichelle Tramble Spellman created search for the truth drama is based on Kathleen Barber’s 2017 novel Are You Sleeping? Emmy nominees Lizzy Caplan and Elizabeth Perkins, Emmy winner Ron Cephas Jones and Mekhi Phifer are also in the mix in this saga of the Spencer portrayed podcaster Poppy Parnell seeking to probe anew a murder verdict that may have been very wrong in more ways than one.

The highly stylized and era ambiguous Reprisal on the Disney-controlled streamer finds Timeless vet Abigail Spencer out for blood as a femme fatale once left for dead – and there’s a lot of blood in the noir-ish drama from creator and showrunner Josh Corbin. Executive produced by The Handmaid’s Tale’s Warren Littlefield, the fast cars, gangs and guns filled Reprisal also stars Mena Massoud, Rhys Wakefield, Rodrigo Santoro and Sons Of Anarchy’s Ron Perlman.

So, as I say every week, which one is the show you have to watch? You’ll have to watch the video above to find out – start your engines!