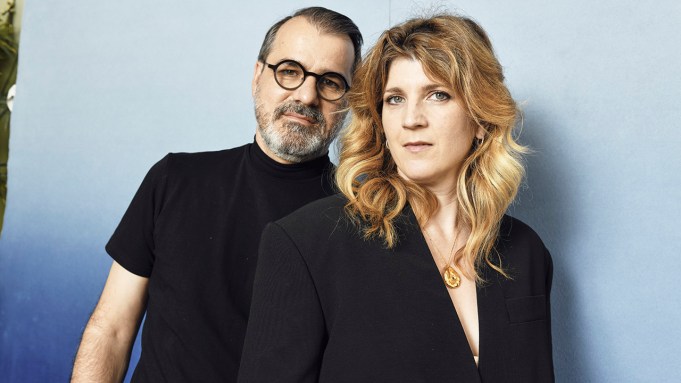 In Pieces of a Woman—the Kornél Mundruczó-directed and Kata Wéber-penned film for which its lead Vanessa Kirby was Oscar nominated—Ellen Burstyn’s character describes surviving the holocaust as a baby. Now, in the filmmaking pair’s latest feature Evolution debuting at Cannes, they expand upon that theme with a three-act story examining different generations.

“It was a really crazy year for everyone,” Mundruczó said at Deadline’s Cannes studio. “We were locked down in our Berlin apartment and we started to talk about this topic, and also started to talk about that segment of Pieces of a Woman as well, about how we pass traumas between generations. And we thought it would be great to be create a movie as well out of it.”

The film’s first act details workers aggressively cleaning a concrete room and finding long skeins of hair embedded in the walls and clogging the drains. Once outside the room, it becomes clear we are at Birkenau, and we see the military find a baby. That baby is Eva—the old woman we then see struggling through dementia and confusion as she recalls her haunted past in the second act. She is played by Hungarian veteran actress Lili Monori.

In creating that opening sequence, Mundruczó wanted to show how trauma affects memory. “How can I describe the trauma physically, not to reveal what was there, but kind of do it on a poetic level, if I may say, and using elements, for example, the cleaning and the hair. How does it come together in the destroyed mind of someone as a memory… It was pretty risky in that sense—how you can shoot about Birkenau and how you can create anything. But the miracle that you can find a baby there, that was the thing.”

Weber wrote the script in just six weeks, Mundruczó said, and the shoot was only 13 days.