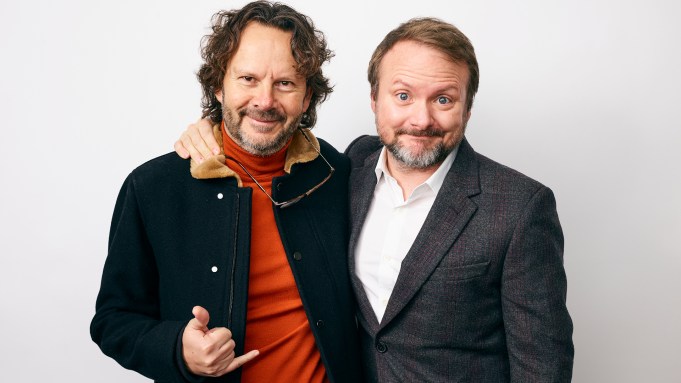 Writer-director Rian Johnson took inspiration from his favorite Agatha Christie mysteries for Knives Out, which has has been holding its own with adult audiences at the fall box office. But he told the crowd at Deadline’s recent The Contenders New York that he also wanted to write a modern-day original.

In the tradition of Christie ensembles, the all-star cast of the Lionsgate film plays possible suspects in a murder mystery. Daniel Craig is Benoit Blanc, the sleuth investigating the Thrombey family and their maid (Ana de Armas) after the death of patriarch author Harlan (Christopher Plummer). Chris Evans, Jamie Lee Curtis, Michael Shannon, Toni Collette, Don Johnson, Katherine Langford and Jaeden Martell play the Thrombeys. They represent the 1%, with some specific 2019 digressions. For example young Jacob (Martell) is an alt-right online troll.

“We see it today, it’s usually an Agatha Christie adaptation,” Johnson, joined onstage by his producer Ram Bergman, told the DGA Theater crowd of Academy and guild voters. “It’s usually a period piece set in Britain. It’s easy to forget that when she was writing, it’s not like she was a heavy political writer, but she was always engaging with contemporary British society of her time through her characters.”

He added: “I love the Agatha Christie adaptations, but the notion of doing an original and really plugging it into 2019 America, not just giving it a modern skin but… using this little microcosm to look at that, that seemed like that could be really interesting.”

The mystery unfolds in the Thrombey house, which is a character unto itself. “One day we saw a picture, we said, ‘This looks like the house,’ ” Bergman said. “I took Rian there while he was still writing and we zeroed in on the house, but it took us like months and months to actually negotiate a deal. We literally cemented it like two weeks before we started filming.”