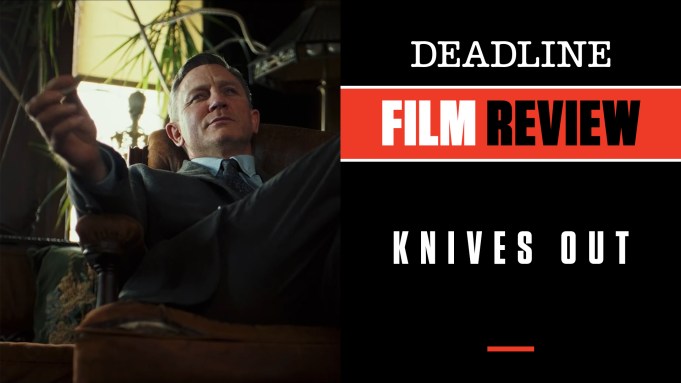 Writer-director Rian Johnson loves to dip into completely different genres and modes of storytelling in his various movies including the high school noir Brick, conmen comedy The Brothers Bloom, futuristic mob movie Looper and sci-fi juggernaut Star Wars: The Last Jedi. Now he has jumped on the all-star murder-mystery bandwagon with the hilariously entertaining Knives Out, which takes a page from Agatha Christie but is a wholly original work from Johnson in which everyone just might have done it.

Of course that was near the premise of her classic Murder on the Orient Express, which has been turned into two hit movies, most recently a couple of years ago by director-star Kenneth Branagh. Johnson comes up with new angle and lots of twists and turns in a devilishly clever and entertaining riff on the genre. This kind of film depends mightily on the cast you put together, and Johnson has done a yeoman-like job with this one. What more can you ask of a film that manages to gather James Bond, Captain America, Laurie Strode and Captain Von Trapp in the same movie — not those characters but rather the iconic stars who played them.

Craig plays Detective Benoit Blanc with a tip of the hand to Hercule Poiroit but with a Southern-fried touch. He is called to the Thrombey Estate to investigate the death of 85-year-old patriarch Harlan Thrombey (Christopher Plummer in fine form), a crime novelist who was done in apparently by someone in his extended and quite dysfunctional and eccentric family. But who? That is the big question as Blanc looks under every rock for clues and meets this motley bunch of suspects including Jamie Lee Curtis, Chris Evans, Michael Shannon, Don Johnson, Toni Collette, Katherine Langford and Ana de Armas as Marta, Thrombey’s caregiver who is thrust into the middle of this combative family.

Much is revealed about Harlan through flashbacks, but I won’t give any of it away here. I don’t like to give detailed plot points or character eccentricities for a movie in which the surprises account for so much of the fun. It is a mystery, so this is a spoiler-free review in that regard. In addition to all these fine actors, there is nice work from LaKeith Stanfield as another investigator and a wickedly funny K Callan, who plays Harlan’s mother Greatnana Waletta — yes, mother. It is just one of the numerous fiendishly funny bits Johnson has come up with to build his mystery.

Everyone in the cast has a moment or two, but special shout-outs to Curtis, Evans and Collette, who really get to deliver the goods. De Armas also has a star-making role here, a warmup to future appearances (with Craig) in the next Bond film and as Marilyn Monroe in another upcoming project. She’s terrific. This is such a time-honored genre, and Johnson proves he knows exactly how to balance the mystery and clues with some outrageous humor and a zippy, modern tone that never takes away from the fun. What a treat.

Ram Bergman produced with Johnson. Lionsgate opens it Wednesday — a perfect Thanksgiving attraction to make you appreciate maybe that our families are not quite as screwed-up as this one. Check out my video review at the link above, with scenes from the movie.

Do you plan to see Knives Out? Let us know what you think.