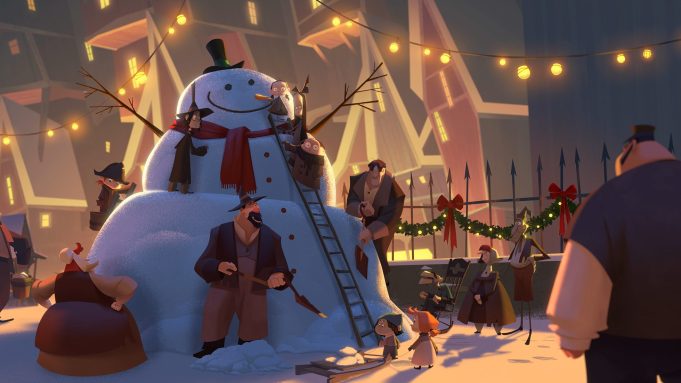 Scripted by Despicable Me co-creator Pablos, Zach Lewis and Jim Mahoney, Klaus centers on Jesper (Jason Schwartzman), a failing student at a postal academy, who is stationed at Smeerensburg, a frozen island above the Arctic Circle where it seems there are no friends to be made. While forging a bond with local teacher Alva (Rashida Jones), Jesper encounters Klaus (Oscar winner J.K. Simmons), a mysterious carpenter who lives alone in a cabin, building toys by hand—and it’s this set of unexpected friendships that returns joy to a most somber place.

Co-starring Norm Macdonald and Joan Cusack, Klaus came to Pablos as he was looking for that next great feature idea. “I came across the notion that there’s no widely accepted origin story for Santa. I mean, there is, but depending on who you ask, you’d get the historical answer, or the religious answer, or an answer based on one of the many traditions from different countries,” the writer/director told Deadline recently. “The more I worked on it, the more it revealed itself as a story filled with character, comedy and heart.”
As Pablo explains in the exclusive featurette above, Klaus was crafted with fondness for a kind of animation that is rarely embraced by studios today, in an age of increasingly sophisticated computer-generated imagery. Shopping the film around to studios, the director was surprised by what he found—that “what we thought were the strongest attributes of the film were often perceived as ‘too risky,'” he explained.
Bringing Netflix its first original animated feature wasn’t something the director planned out. But “it was not until we landed at the Netflix offices that we found an open mind and a brave disposition to sail into uncharted waters,” Pablos shared. “It’s only thanks to that, and to the incredible support and hands-off approach that we received from Netflix that this film exists at all.”
“It’s also worth noting that when they decided to move forward with Klaus, there was still no feature animation division at Netflix. In fact, we were a bit of a rarity. However, in the two-plus years since we began pre-production we’ve witnessed the incredible transformation that has happened at Netflix in regards to animated features,” the helmer added. “Suddenly, we find ourselves spearheading a lineup of incredibly exciting films helmed by amazing talent from around the world. It’s both humbling and exciting, to say the least.”
Coming to theaters on November 8, Klaus will be released on Netflix on November 15.
To hear more from Pablos about his forthcoming animated feature, click on the video above.