Continue to Deadline SKIP AD
You will be redirected back to your article in seconds
Skip to main content
October 29, 2020 9:00am 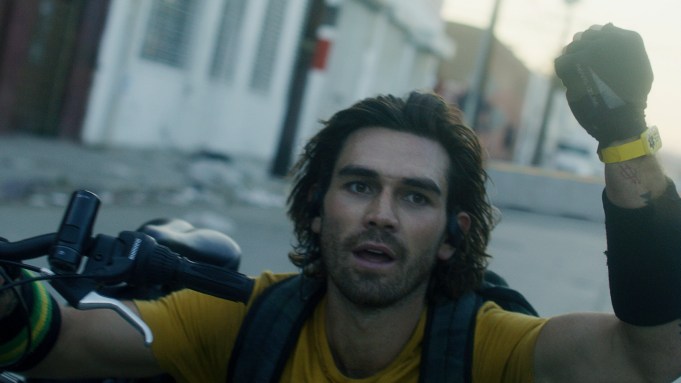 “Sometimes we have to do things we don’t want, to survive,” says Demi Moore’s enigmatic baddie in STX and Invisible Narratives’ upcoming pandemic thriller Songbird. The movie was one of the first features to shoot this past summer in Los Angeles during quarantine, paving the way for production safety protocols (listen to our chat with Songbird Invisible Narratives producers Adam Goodman and Andrew Sugerman here).

Riverdale‘s KJ Apa stars as Nico, a bicycle messenger in a near post apocalyptic future where COVID-19 has, gulp, mutated to COVID-23. He’s smitten with his g.f. Sara (Sofia Carson), and it looks like these two haven’t been able to see each other for a while. Complicating life greatly is that the government is snatching up people who have the virus and tossing them into camps. Take a look.