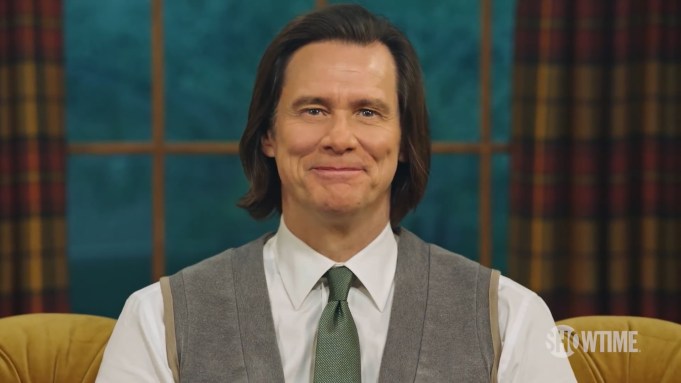 There is a lot that is not very funny about the decidedly bleak Showtime series Kidding from Jim Carrey and Michel Gondry, and that’s both good and bad. Taking viewers behind the scenes of a long-running children’s TV series Mr. Pickles’ Puppet Time and the damaged people literally and figuratively pulling the strings, the series created by Dave Holstein and debuting September 9 will certainly test your patience and expectations. However, with that not insignificant caveat, the 10-episode first season is still worth watching if you can grind through, as I say in my video review above.

This second collaboration between the star and director of the 2004 Oscar winner Eternal Sunshine of the Spotless Mind also marks an evolution of the CBS-owned premium cabler’s relationship with Carrey. Still, following on I’m Dying Up Here which Carrey executive produces and which may or may not be cancelled, Kidding is kind of all over the shop.

A lot of that falls on Carrey, who has all his bag of tricks on display here for better or worse. Doing double duty as star and EP, his deeply wounded and repressed Jeff Pickles has the loss of one child, the emotional loss of another child, a collapsed marriage and pressures from his executive producer/father (played by Frank Langella doing his best Rip Torn from the Larry Sanders Show tribute) to deal with. Amidst the call from the senior Piccirillo not to discuss death nor disrupt the money-making machine, it’s often hard to gauge Carrey when he goes into an emotional scene here as you always half expect a gag or grimace to pop up – as they often do.

Besides some nifty graphics and the Mr. Rogers overtones of the fictional show, the real magnets of Kidding are Spotless Mind alum Katherine Keener as Jeff’s sister and the show’s chief puppet maker, and Judy Greer as Jill, Jeff’s estranged wife, who has found a new love in Justin Kirk and new freedoms to live and rage.

So, with that, take a look at my Kidding video review to see more of my take. Will you be tuning in Sunday to see what the fuss is about?