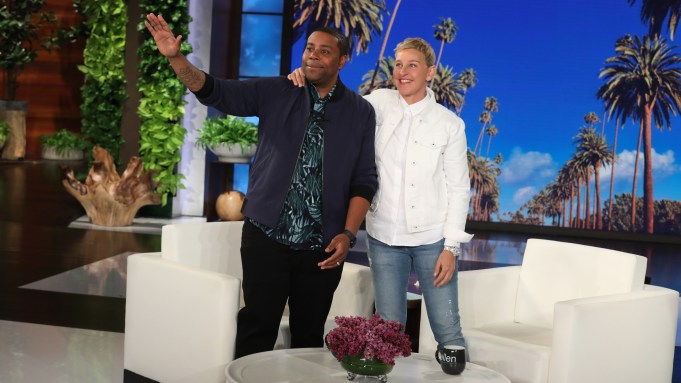 Kenan Thompson, Saturday Night Live‘s longest-tenured cast member, says he has no immediate plans to follow that SNL tradition begun way back in 1976 when Chevy Chase left for the West Coast: In other words, Kenan’s staying put, at least for now, and will be back for Season 45.

That’s 45 seasons for SNL, not Thompson – he’ll be at a mere 17 when he and NBC’s comedy institution returns next fall.

“It’s the best job in the world,” Thompson says on today’s episode of The Ellen DeGeneres Show. “I can’t see myself just walking away from it like that, even with how busy I’ve been with another show on NBC called Bring The Funny.”

Bring The Funny, a comedy competition, debuts July 9 on NBC, and features Thompson as a judge, along with Chrissy Teigen and Jeff Foxworthy. Amanda Seales is the host.

Thompson also has an NBC comedy pilot in the works called The Kenan Show, from Universal TV. Punam Patel and Andy Garcia have also been named to the cast.

Thompson’s appearance with Ellen today is his first time on the show. In addition to his SNL comments, he talks about winning an Emmy Award for his “Come Back Barack” sketch, where he keeps the award, and his worst impression (take your guesses and check out the video above).