Anne Heche “Not Expected To Survive” After Severe Brain Injury, Will Be Taken Off Life Support
Read the full story
June 17, 2021 6:00am 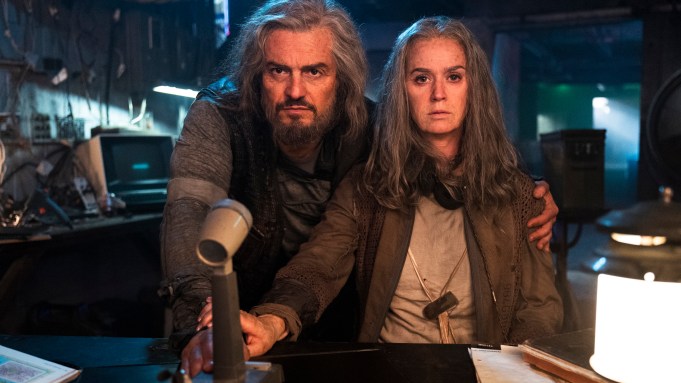 Katy Perry and Orlando Bloom are starring together — for the first time — in a new video warning of the peril if the Senate does not pass landmark voting rights legislation.

In the video, Perry and Bloom play the scruffed up and haggard versions of themselves in a dystopian future, the year 2055, delivering a warning of what has transpired because major election legislation was not passed in 2021.

The 2055 Bloom says, “You are our only hope. The America you know doesn’t exist in our future. Democracy is dead. We have no voice.”

Perry replies, “It started when voter suppression ran wild all over America. The voting rights bills died in the Senate. Polling places closed. We lost our right to vote.”

Among the images that flash across the screen: Sen. Joe Manchin (D-W. Va.), from an appearance on Face the Nation. Manchin opposes the For the People Act, or H.R. 1, the legislation that would end partisan gerrymandering, expand voting rights, create new public campaign financing, and require presidential and vice presidential candidates to disclose 10 years worth of their tax returns.

Senate Majority Leader Chuck Schumer says that the Senate will consider the For the People Act this month. Manchin on Wednesday released a compromise proposal.

Stacey Abrams said on Thursday that she supports Manchin’s proposal. telling CNN that it offers “some basic building blocks that we need to ensure that democracy is accessible no matter your geography.”

Still, it is unclear whether even that compromise would get enough Republican support to reach the 60 vote threshold to avoid a filibuster.

The Perry-Bloom video, Transmissions from the Future, was released by RepresentUs, the nonpartisan anticorruption organization. that is backed by a number of industry figures. Adam McKay, Jennifer Lawrence, Erik Feig and Ed Helms are among members of the group’s board. RepresentUs has advocated for a series of anti-corruption, voting rights and other measures in government at the local, state and federal level.

In a statement, Bloom said, “The For the People Act is the single most important piece of legislation of our lifetimes, and 70% of the American people support it. It must pass—or we risk all of the freedoms promised by American democracy. No matter what issue you care about, it hinges on the For the People Act’s passage. I am proud to work with RepresentUs to bring attention to this bill at a time when the stakes have never been higher.”

In her statement, Perry cited state-level efforts by Republicans to restrict access to voting. She said, “As we saw most recently in Georgia and Texas, politicians are attacking our freedom to vote through passing laws that make it harder for seniors, veterans, communities of color, and rural voters to cast their ballots. Time is running out to stop their efforts. I urge you to call your Senator immediately and tell them to vote in favor of the For the People Act.”

The video was directed by Jake Kasdan and written by Ted Sann, former chairman of BBDO and chief creative officer.

RepresentUs president Joshua Graham Lynn said, “If we don’t act now, we face a future where elections are so rigged, so few people’s votes are counted, billionaires are so in control of our government that the voices of citizens are silenced just like Russia or North Korea.”