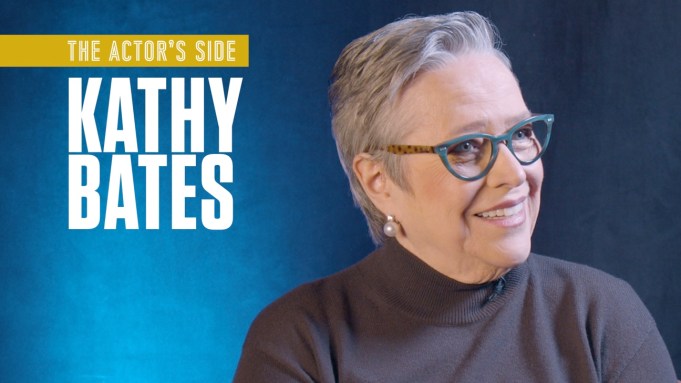 One of the great joys of getting to do my Deadline video series The Actor’s Side is getting the chance to sit down with people I have admired for years, actually decades.

One of those is undeniably Kathy Bates, who joins me in conversation for our latest episode, and I can’t think of a better way to start off the new year than in talking with this great actress who won an Oscar for her memorable performance as Annie Wilkes in Misery, and has amassed numerous other awards in her long career including a few Emmys off of 14 nominations, Tony nominations and so much more.

In this wide-ranging interview we talk about the latest film to deliver Bates awards buzz: Clint Eastwood’s Richard Jewell, for which she is nominated for a Golden Globe on Sunday. She already won the Best Supporting Actress prize from the National Board of Review and is generating lots of Oscar talk for the movie in which she plays the mother of the Atlanta security guard falsely accused of planting the bomb during the 1996 Olympic Games. We discuss that role and her preparation for it in spending time with Bobi Jewell, who is still alive.

We also had a great time running through highlights of Bates’ career including her very first film, Milos Forman’s Taking Off; her early years growing up in the South; her Broadway triumphs including ‘night Mother and how disappointed she was that she didn’t get to do that movie version; the origins of how she was cast in Misery and thought it was so bizarre she didn’t know how to process it; plus her bouts with cancer and a third-act comeback in FX’s American Horror Story.

It is all here and more, so click on the video above to watch the conversation.