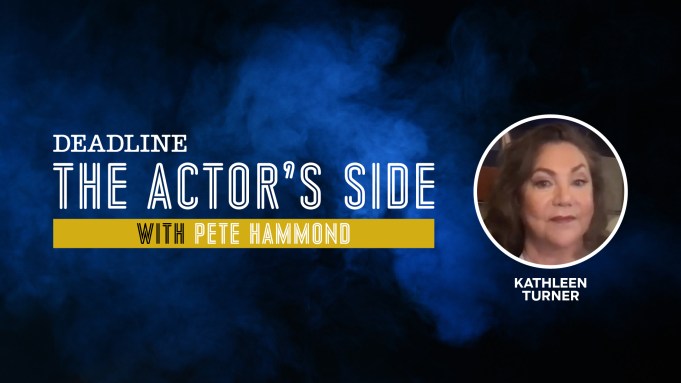 The Kominsky Method begins streaming its third and final season — six new episodes — on Friday. If ever there was a reason to tune in and binge the whole thing, it is the presence of none other than Kathleen Turner, once again working opposite Michael Douglas. With Alan Arkin leaving after Season 2 (and the subject of the funeral that kicks off the new season), it seemed natural that Turner, playing Douglas’ character’s ex-wife Roz, would appear in his life again after one memorable guest appearance in Season 2.

Let the fireworks begin. As she tells me on this week’s edition of my Deadline video series The Actor’s Side, the chemistry between the two stars is just something you can’t define, and, of course, made big hits in the movies, with Romancing The Stone, Jewel of the Nile and The War of the Roses.

Turner says she was really impressed with creator Chuck Lorre, who wrote all the episodes and provides such juicy characters to play; she did a couple of episodes of his series Mom, as well. Actually, as she tells me, it was on a very different TV series, soap opera The Doctors, that she learned so much about the camera, as it was the first time she ever stepped in front on one of them professionally.

She is a creature of the theatre and still is, as she also describes. Especially working with Edward Albee, who wrote her a note on the closing night of the revival of Who’s Afraid of Virginia Woolf? that simply said, “You are the reason I became a playwright.” She has that note in a safe-deposit box. Turner talks also about some other iconic roles in films, including her very first, Body Heat, in which she says they knew they might have been making a game changer, certainly one that did things not seen in movies up to that time.

After that, she was offered many femme fatale roles, but opted for a comedy instead in order to work with Carl Reiner (“a true master”) and Steve Martin. She talks about why Jessica Rabbit (she’s the unforgettable voice) is such a fan favorite, her meetings with Lauren Bacall (who greeted her with the line, “I hear you are the new me”) and why Albee hated the film version of Virginia Woolf.

And there is so much more from this star, who feels she is still just getting started. We start out talking about what John Huston said to her while they were making his classic film, Prizzi’s Honor.

To watch our conversation and get the actor’s side from Kathleen Turner, check out the video above.

Check out a new episode of The Actor’s Side every Wednesday this Emmy season.