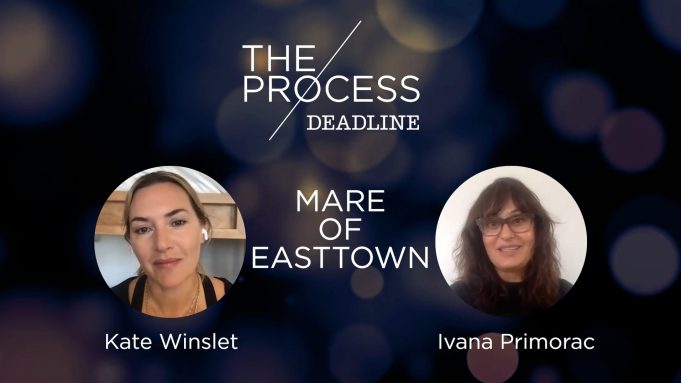 As the executive producer and star of Mare of Easttown, Kate Winslet’s mission was “to keep everything profoundly real”—starting, of course, with the character she was playing.

The crime drama created by Brad Ingelsby for HBO centers on Mare Sheehan (Winslet), a detective in the small Pennsylvania town of Easttown who investigates the murder of one young girl and the disappearance of another, while struggling to keep her life together, following a tragic loss.

Winslet’s goal with Mare was to distance herself visually from characters she’s played in the past by putting together “a person who just looked like a woman going through life, like most people, dealing with the weight of those daily struggles and challenges that she faced.”

In creating the character, the actress worked closely with her personal hair & makeup stylist Ivana Primorac—a three-time Emmy nominee, who joined her recently for a conversation on Deadline’s video series, The Process.

Prior to Mare of Easttown, Primorac had worked with Winslet for more than a decade, on films including The Reader, Labor Day, Divergent, A Little Chaos, Steve Jobs, The Dressmaker, Collateral Beauty, Blackbird and Ammonite. She was also well acquainted with styles of hair and makeup one might see in Mare’s area, having already worked on projects set near Philadelphia.

Still, she feels that the detective was “more complicated” than any other character the pair had previously brought to life together.

“About Mare, I had real fear, because the responsibility to the viewer was huge. I felt that they needed to completely believe and trust this person not being Kate,” Primorac says. “[She] had to be transformed into Mare, more so I would say than other people, to give [her] a chance to be able to tell the story over such a long period of time.”

One of the saving graces of the project, for Primorac, was that she was able to spend more time with Winslet in prep than she had on other projects. The pair first began the work of finding Mare five or six months ahead of their October 2019 shoot, and considered all possible permutations of a look for a character, experimenting with wigs of different lengths and colors, colored contact lenses, textured makeup and more.

Winslet recalls that at one point, they considered making Mare a redhead with a “lovely green” eye color, “just making her look like that sort of Irish Catholic heritage.”

“It’s so funny. When I look at the photographs that we took of those initial early fittings, I’m just like, ‘Oh my God. It so isn’t Mare at all,'” she adds. “That process of how we came to decide on what she would feel like and look like was actually quite lengthy, in the end.”

“I think our sort of MO was, Mare looks in the mirror when she brushes her teeth in the morning, and scrapes her hair back in that same damn manageable ponytail every day, and that’s it. Then, she doesn’t look in the mirror again until she goes to bed at night,” Winslet summarizes. “[We wanted] that sort of naked, translucent, totally clear face, so that all you see is the marks of her life, as opposed to the face she’s applying on top of it by way of any kind of makeup.”

Upon its premiere in April, Mare of Easttown broke out as a water-cooler phenomenon and was renewed for a second season. For Primorac and Winslet, the show’s success is a reflection of the work they put in to make Mare not a gimmick or a caricature, but a fully realized person.

In their conversation on The Process, Winslet and Primorac further break down their Mare of Easttown collaboration. They also touch on Primorac’s background, her turning-point project (Billy Elliot), Winslet’s efforts to create “a sense of balance and equality” on set, and more.