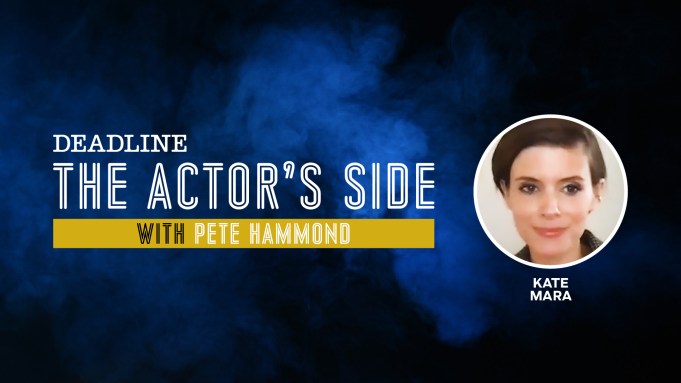 Kate Mara has had a busy career so far on the stage and in TV and movies. Her big dream was, and still is, is to hit the bright lights of Broadway, but achieving the kind of success most actors dream of have made that Broadway debut a dream delayed as she explains in this week’s edition of my Deadline video series The Actor’s Side.

Coming from a family of football kingpins as well as show business (her sister is Rooney Mara), Kate has never been too far from the spotlight. But she earned her own way with memorable early TV appearances in hit shows like Everwood, Nip/Tuck, American Horror Story and more in which she played a number of provocative roles. She talks here about a big break playing Zoe Barnes on House of Cards and getting to work with David Fincher as a seminal moment in her career, along with movies like Brokeback Mountain, The Martian, Megan Leavey and Chappaquiddick among many others.

The main topic of discussion though is a deep dive into her breakout limited series A Teacher for FX, which has drawn record numbers of viewers in its streaming run on Hulu. The 12-part half-hour drama is based on Hannah Fidell’s 2013 indie hit of the same name but has been expanded to tell a much fuller story of a forbidden affair between a high school teacher and a 17-year-old student (played by Nick Robinson). Mara, also a producer on the show, explains she was especially drawn to the project due to the complicated nature of her character, and especially in how it shows the aftermath of the actions of both teacher and student. She says it was important that we have some sympathy for these characters even though they are caught up in a morally compromised situation, and that it was exciting for her as an actor to be going  to some “weird dark places” in telling the whole story.

A Teacher, which has been getting strong Emmy buzz, also does not stint on the sexual attraction between the two characters, with Mara saying the physically intimate and emotional scenes were important in making the series as authentic as it could possibly be. In terms of shooting those scenes she describes herself as “being weirdly comfortable in uncomfortable circumstances.” Watch a scene below from A Teacher and then click on the video at the top of this post for our conversation as we get the actor’s side of things from Kate Mara — beginning with a declaration of the one thing you will never, ever catch her doing in her career.

Here’s the clip from A Teacher:

Look for a new episode of The Actor’s Side every Wednesday during this Emmy season.