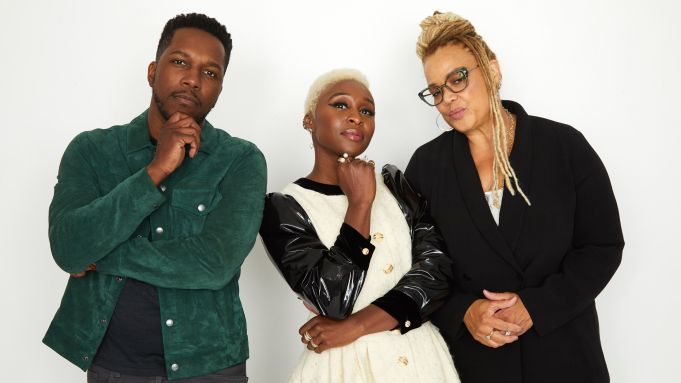 When Kasi Lemmons saw that Cynthia Erivo was attached in the titular role of Harriet, Lemmons knew she wanted to direct the film. Then together, the pair worked hard to present an authentic picture of legendary abolitionist Harriet Tubman.

“I can remember you being at my house and [talking about], ‘Look at her face to face, and her mouth, and her eyes, and really study her, and try and channel her,’ which you did amazingly,” Lemmons told Erivo at Deadline’s TIFF studio. “I mean, from the first moment that first day. I mean, I felt it so deeply.”

“I knew that I could cry, sob, ugly cry with her,” Erivo said of working with Lemmons. “She didn’t mind me doing that, which meant the world to me, which just gave me the space to discover her movement, her body, where she was, the mindset, the way she would speak. We talked about, ‘Where are we placing her vocal resonance? Where are we putting her, in speech? What’s her pace?’ Those kinds of things. And those are the things that really matter to me, because I feel like those are the things that make a human, human—everyone’s rhythm, everyone’s sound.”

For Leslie Odom Jr., playing famed Underground Railroad conductor William Still came about through his friendship with Erivo and producer Debra Martin Chase. “I got roped in by some very strong women,” he said. “My friend Cyntha Erivo, and Debra. I just kept hearing about this project from different people that I cared about, and then when Kasi came on, it was a no-brainer for me. I just wanted to be a part of this moment and this movement, to help tell this woman’s story with these powerful women.”