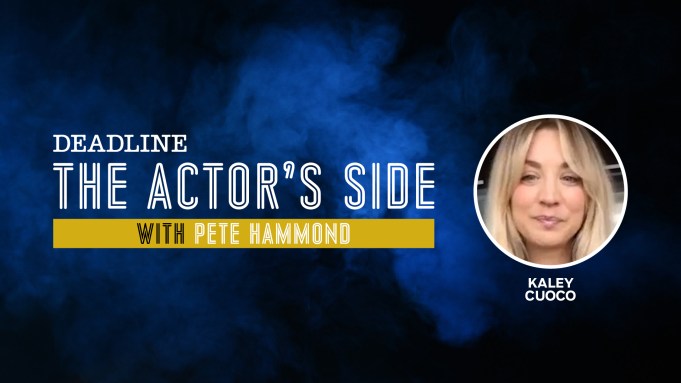 It was a little surprising to me to learn that after 12 seasons on TV’s No. 1 comedy The Big Bang Theory, Kaley Cuoco had never received an Emmy nomination for it, or for any other show in her career that includes her breakthrough sitcom 8 Simple Rules opposite John Ritter. Well now the Television Academy has finally recognized her versatile talents and she has not one but two nominations for her hit HBO Max comedy mystery series The Flight Attendant. Cuoco is up not only for Lead Actress in a Comedy Series but also as a producer in the Outstanding Comedy Series category for the series, which garnered nine Emmy nominations in total for its first season. Not bad.

As Cassie Bowden, the international jet-setting flight attendant who gets caught up in a global murder plot, Cuoco has found the perfect follow-up to a sitcom that seemed like it might run forever. The Flight Attendant, however, is a show developed for Warner Bros Television by her production company Yes Norman Productions and Greg Berlanti that came about when she got hold of the book (a much darker vision than the series has become), optioned it (without actually reading it), and managed to get it flying. Plus it was a ideal role for her, and so it took off immediately.

We talk about all this in this week’s edition of my Deadline video series The Actor’s Side. In addition to the series that has brought her not only Emmy but also Golden Globes, Critics Choice and SAG nominations we discuss Harley Quinn, the animated series for which she already won a Critics Choice Award for her raucous and raunchy vocal performance as the title character from the world of DC comics and the Suicide Squad. There is much more, including her memories of Ritter, a real mentor as she tells me, and her plans for another limited series she is developing on the life of Doris Day, a role she was born to play. She also has a new movie coming, The Man From Toronto opposite Woody Harrelson and Kevin Hart, and much more.

To watch our conversation and get the actor’s side of things from Kaley Cuoco, click on the video above.