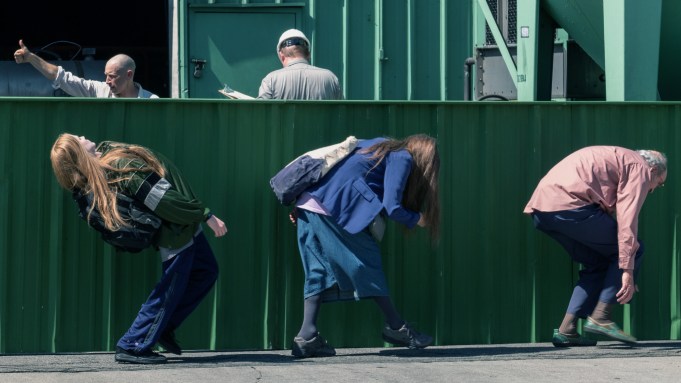 “Most people wanna be kajillionaires,” Dad says. “That’s the dream. That’s how they get you hooked — hooked on sugar, hooked on caffeine. Ha, ha, ha, cry, cry, cry. Me? I prefer to just skim.” His daughter looks up and says, “So do I.”

Welcome to the first trailer for Kajillionaire, Miranda July’s Sundance comedy about a family of grifters. Here is your logline: Con artists Theresa (Debra Winger) and Robert (Richard Jenkins) have spent 26 years training their only daughter, Old Dollo (Evan Rachel Wood), to swindle, scam and steal at every opportunity.

“She learned to forge before she learned to write,” Pops boasts of Old Dollo. “Actually, that’s how she did learn to write.”

During a desperate, hastily conceived heist, they charm a stranger (Gina Rodriguez) into joining their next scam, only to have their entire world turned upside down.

July, whose Me and You and Everyone We Know was a multiple prize winner at Cannes in 2005, wrote and directed Kajillionaire as her first feature since 2011’s The Future. Dede Gardner, Jeremy Kleiner, Youree Henley are the producers.

The trailer features “Mr. Lonely,” a song performed by Angel Olsen & Emile Mosseri, the latter being the film’s composer. Produced by Plan B and Annapurna Pictures produced Kajillionaire, which Focus Features plans to release September in theaters. Have a look at the trailer above and key art below.