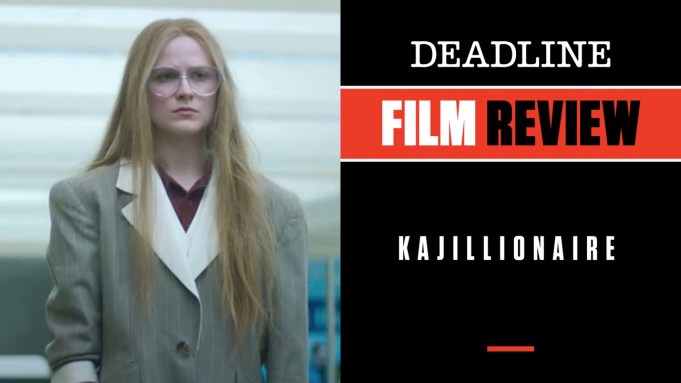 With Miranda July, either you get it or you don’t.

The actress also is a critically acclaimed writer-director whose third feature, Kajillionaire, had critics going to their thesaurus to find new words with which to heap praise on her adventurous quirkiness. Not everyone will get the joke, but if you are on board with this certified original of a filmmaker and her recurrent themes of human connectiveness in a world where we are increasingly becoming isolated, you will not be disappointed. But you might be scratching your head to connect to these characters yourself.

July made 2005’s quite terrific Me and You and Everyone We Know and then a follow-up in 2011 called The Future. For her first trip behind the camera in nearly a decade, she has her most impressive cast, and they do everything they can to make the offbeat world in July’s head come to life. Evan Rachel Wood, employing an odd, stilted voice and uncut hair, is Old Dolio (don’t ask), the emotionally stunted 26-year-old daughter of Robert (Richard Jenkins) and Theresa (Debra Winger) Dynes. They are a family living on the edge of society — you could call them scammers, skimmers, grifters, drifters, whatever. They have been this way all of Old Dolio’s life and trained her to be just like them and to do their dirty work in eking out a living with their various assortment of cons.

The parents are not what you would call role models, unless your role model is someone who basically thinks only of themselves and their way of life before what’s good for their kid. Right from the opening scam, we see what they are up to. That sequence set at a Post Office revolves around the trio pulling off a switcheroo with post boxes, but the payoff doesn’t seem to be much. They are like anyone more overtly begging for money; they happily take whatever they get and try to get by day to day, week to week, month to month, year to year by the seat of their pants. They aren’t dreamers looking to become instant “kajillionaires” with their plans, more like skimmers, and if they can scrape up a few hundred to pay the measly $500 rent on their “home” (a dilapidated office building with old cubicles and some pink soap bubbles constantly coming in from the factory next door) then that is a success.

Where the fun to be had in this film is in watching them pull off their weird schemes. The best idea, from Old Dolio, involves flying to New York from L.A. in a con involving claims of lost luggage. Robert is freaked out by the turbulence, reminded of earthquake rumblings on the Southern California streets they haunt each day. This group does not like shaking to be sure, but shakedowns are fine. However, this is where they meet Melainie (Gina Rodriguez), a bubbly passenger and doctor’s assistant who has, by the end of the flight, believe it or not, basically signed up to join this scam team, and she has some ideas of how to pull the rug out from under unsuspecting seniors. Unlike their own daughter, she is a real live wire, and Rodriguez breathes life into the movie with every scene she is in.

As this all drags on, there is one particular disturbing scene where they hit the suburban home of their latest “mark,” doing their pretend-family bit as we hear a man in deep pain moaning from the bedroom. Not even Billy Wilder could have pulled off the tonal discord of this scene, and July might have been wise to let it go. Ultimately, however, as I said, July is most interested in connection, and it is the liberation of Old Dolio through her time with Melanie that provides the heart and soul here.

Jenkins can do no wrong, as I said in my review Monday of his other release this week The Last Shift. Both he and Winger, the latter with scraggly long hair and dressed like a bag lady, understand perfectly the rhythms of July’s writing and actually might make a pretty good movie just on their own. You have to admire Wood for going all in on the Old Dolio bandwagon. She is, to put it mildly, difficult to warm up to, but eventually you understand how she got to be who she is. I have to confess that much of this film made me uncomfortable watching it, but it really does get better the more you think about it. July doesn’t make movies like anyone else. If you are a fan, go for it.

It comes from Annapurna and Plan B. Producers are Jeremy Kleiner, Dede Gardner, and Youree Henley. Focus Features puts it into release Friday. Check out my video review with scenes from the movie at the link above.

Do you plan to see Kajillionaire? Let us know what you think.