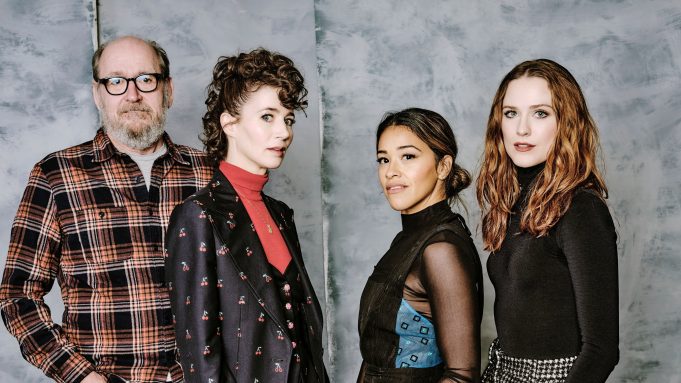 In Miranda July’s Kajillionaire, Evan Rachel Wood found the opportunity to play a character unlike any she’d seen on screen before. “It was like opening up a box of treasure,” the actress says of her first read of the script. “I was stoked from the start.”

Produced by Plan B and Annapurna Pictures, the offbeat drama centers on Old Dolio Dyne, an eccentric, uncommunicative young woman who grew up with petty criminals for parents. Living her own strange version of reality, Old Dolio’s life is forever changed when her folks invite a charming stranger in on their next scheme.

For Wood, the character of Old Dolio emerged from a number of rehearsal sessions with July. “I’d come over to Miranda’s office, and she’d have these super baggy clothes waiting for me. I’d go change into them, and then we would kind of act out scenarios. [Miranda] would limit me—like, [she] would take a form of communication away from me, for every kind of scenario,” the actress told Deadline, while sitting down with July. “At one point, I couldn’t use words; I could only use animal-like sounds, and grunts, and noises. I think I ended up walking around, knocking books off [her] shelf and grunting.”

“I basically wanted to shut [her] down. Like, you are a full, human person inside there, but because of the live you’ve lived, you don’t have access to all these outlets, all these ways of expressing yourself,” the Kajillionaire director explained. “That was so interesting, because that was like three days, but then [Evan] took that and turned it into someone. I mean, those were just kind of simple ideas.”

“But you’re so specific about what you want,” Wood replied. “As an actor, it’s actually more freeing for somebody to go, ‘Okay, here are the parameters.’ Then, once you have those, you just get to bounce off the walls in that space.”

Also appearing at Deadline’s Sundance Studio were Kajillionaire’s Gina Rodriguez and Richard Jenkins, who were every bit as effusive as Wood in praising their director, and her singular vision. “I would have done anything Miranda asked me to do,” Rodriguez said. “When it was coming from her, it was mind-blowing, and then I read the script and I was like, ‘This woman’s a genius. I just want to be in her presence.’”

For July, the story of Kajillionaire felt like one that had been brewing over the course of her whole lifetime. But it was following her attempt at writing two other scripts that the project really clicked into place. “I just took notes for days, sort of feeling like I was taking dictation—like, ‘And then what happens? And then what happens?’—knowing this is a rare thing as a writer. It was weird and goofy, and this heist stuff was a little unfamiliar,” the director recalled. “Then at the end, I looked it all through and I was a little devastated, and realized, ‘Oh, wow. This is like the inherent betrayal in the parent-child relationship, which I never would have chosen, or known how to write about.’”

“So, I’m so lucky that it came that way,” she added. “Because it was actually a joy, and kind of fun, despite that there’s a heaviness in there, too.”

For more from our conversation with the director and stars of Kajillionaire, click on the video above.