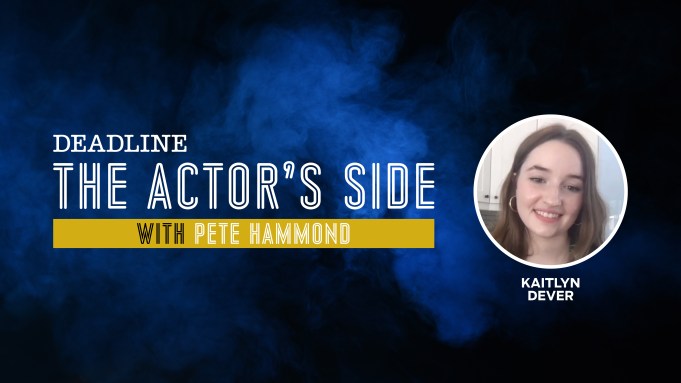 Every now and then a role comes along for an actor that not only proves career-changing but also life changing, and that was the case for Kaitlyn Dever in the true story of rape victim  Marie Adler struggling to be believed in the Netflix limited series Unbelievable. The show, which also stars Toni Collette and Merritt Wever, drew strong acclaim when it debuted in early fall and already has won Dever Golden Globe and Critics’ Choice Awards nominations, plus lots of Emmy buzz as I pointed out during our interview for this week’s episode of my Deadline video series The Actor’s Side.

Dever tells me she knew nothing about Adler’s harrowing story when the opportunity to do the show came about. She talks in detail about how it went well beyond just an acting job and says she was inspired to participate by going to D.C. on behalf of the Debbie Smith Act, and to work with major female directors like Susannah Grant on the finale, and Lisa Cholodenko on the first three episodes.

In fact, unlike the structure of most shows, the first episode was the most demanding for Dever, a highly emotional hour that viewers won’t likely forget and one that pulls no punches. In addition to this project, she tells me why her hit 2019 comedy Booksmart was the basis for the greatest summer of her life, and we also talk about the 2011 indie film Short Term 12, which served as a showcase for a number of then little or unknown future stars including Brie Larson, Lakeith Stanfield, and Rami Malek, along with herself.

Dever also told me how much she cherishes her working experience as a young cast member on the Tim Allen sitcom Last Man Standing and, though interrupted by the coronavirus pandemic, she still hopes to go back and properly wrap up her final episode when production resumes on the Fox sitcom. She practically grew up on that set, but there is no question she is headed for major movie stardom as you will easily be able to tell when watching her give the Actor’s Side.