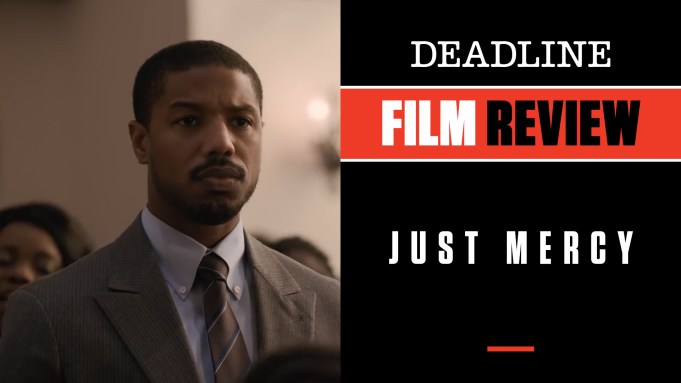 Just Mercy isn’t easy to watch at times, but it is an admirable film about one lawyer’s efforts to free prisoners on Alabama’s Death Row who have been served up a heap of injustice and an impending date with the grim reaper for crimes they didn’t commit. It is all the true story of Bryan Stevenson, a Southern lawyer who puts opportunities for a more lucrative practice behind and travels deep into Alabama in an attempt to help the helpless prisoners for whom time is about to run out.

Although the screenplay by Andrew Lanham and writer-director Destin Daniel Cretton (Short Term 12, The Glass Castle) is based on Stevenson’s book, the film chooses to focus on one case in particular: Walter McMillian (Jamie Foxx), a man accused of murdering a young white woman in 1987, despite a preponderance of evidence showing otherwise. Testimony from a former cellmate, Ralph Meyers (Tim Blake Nelson), whose motives are iffy to begin with, became a key reason Walter was heading to the chair. Stevenson, played with authority by Michael B. Jordan, made this one of the first cases he tackled upon moving to Alabama after graduating from Harvard Law. With the deck stacked against him, Walter has no reason to believe this lawyer will be able to do anything for him, and in fact resists Stevenson’s overtures, but Stevenson will not give up. The two eventually forge a bond as McMillian finally has reason to hope it may not be too late.

There are harrowing scenes as Stevenson is treated by some authorities as if he is a criminal himself — humiliating body searches every time he enters the prison among other things to which a white lawyer would not be subjected. The overt racism and the complete injustice that was on hand not only for McMillian but for many others is explored here.  Particularly heartbreaking is the plight of fellow prisoner Herbert Richardson, played beautifully by Rob Morgan. One scene involving him is moving and angering all at the same time.

Working with Stevenson and helping him navigate all this is local advocate Eve Ansley (a terrific Brie Larson), a paralegal who proves a terrific partner in Stevenson’s often lonely quest. O’Shea Jackson Jr is also impressive here, as is adversary lawyer played by Rafe Spall who seems to be getting a lot of these type of roles lately. Cretton has proven himself a talented director, drawing strong emotional scenes and big dramatic moments that don’t go over the top but land with a certain authenticity needed to tell this kind of story. Stevenson, while certainly the kind of human being we should all strive to be, doesn’t come off as completely angelic, and that is thanks to Jordan’s gritty approach to the role and what is clearly respect for the man he is playing. Nelson in his few scenes is also a highlight.

Although there have been a number of these kinds of legal dramas throughout Hollywood history, it is admirable to bring to light the work of one man out there attempting the seemingly impossible task of taking dead-end cases and finding a path to justice where there was none. If at times there is a bit too much speechifying on the part of Jordan’s character, the words he has to say are well worth hearing and remembering. It is powerful stuff.

Producers are Asher Goldstein and Gil Netter. Warner Bros platforms Just Mercy beginning Christmas Day and releases it wide January 10. Check out my video review above with scenes from the film.

Do you plan to see Just Mercy? Let us know what you think.