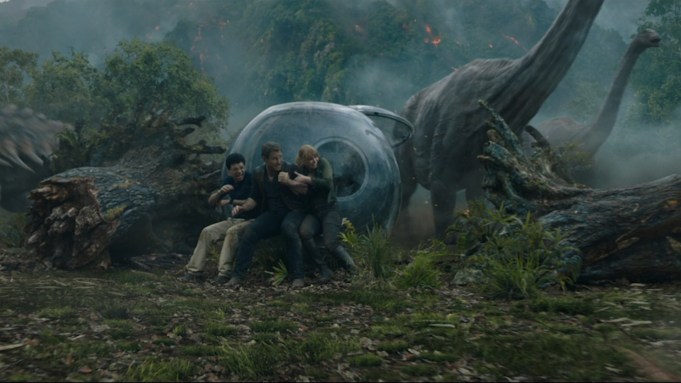 The dinos are back in Jurassic World: Fallen Kingdom, the inevitable sequel to the wildly successful 2015 reboot and ancestor to the series that Steven Spielberg wrought from Michael Crichton’s bestseller beginning in 1993. Jurassic World took things to an extreme by going bigger, if not necessarily better, but was helped enormously by the casting of Chris Pratt and Bryce Dallas Howard, who had just the right required chemistry. Now, three years later they are back, former lovers at this point and dealing with the disaster that destroyed Jurassic World — and now also with a volcano that threatens to completely finish it off, along with the island of Nublar and the remaining dinosaurs who still roam even if no humans inhabit the area anymore.

Jurassic World: Fallen Kingdom‘s rainy nighttime opening sequence that finds some scientists on the deserted isle tinkering with nature (and, as it turns out, some very hungry dinos) is just a preview of what the next two hours will bring — even, as I say in my video review above, if it doesn’t seem there is quite the level of mayhem we saw in previous sequels and reboots. The mayhem is there, but it is just spread out more intelligently by new director J.A. Bayona (The Orphanage, The Impossible) and returning writers Derek Connolly and Jurassic World director Colin Trevorrow, who remains the master architect of the new Jurassic cinematic age, with of course the approval of executive producer Steven Spielberg among other creatives.

In addition to Howard’s Claire Dearing, who is now involved in dinosaur preservation groups, and the return of Pratt’s cocksure Owen Grady, seemingly the one guy who can safely communicate with the once-again endangered species, there are several characters we meet for the first time. They include, in a tip of the hat to Spielberg’s 1993 original, Benjamin Lockwood (James Cromwell), who we learn was the partner of John Hammond (played in the first film by the late Richard Attenborough) until they split over differences when Hammond started Jurassic Park. Lockwood is more of a purist and he wants the dinos saved. He is bedridden now, and entrusts his business interests to a right-hand man, Eli Mills (Rafe Spall), who becomes the film’s white-collar villain as he pushes to rescue the remaining dinos from Nublar and sell them off to unscrupulous types at a massive auction.

Enter Claire and Owen who help in making this possible since they are key to getting the dinos off the island. But once they realize it is a mission up to no good, they embark on their own adventure. Although the early part of the film takes place on the island, the main action is in America once they get these creatures caged and on land.

Joining Clair and Owen are Franklin Webb (Justice Smith), a computer whiz more comfortable behind a desk than confronting brachiosaurus, and dino veterinarian Dr. Zia Rodriguez (Daniella Pineda), whose skills also come in handy. Along for the ride of course is a freaked-out young child; in this case it is Lockwood’s cute granddaughter Maisie (Isabella Sermon). Rounding out the cast is a greedy businessman and auction guru played by Toby Jones, and some Jurassic veterans including B.D. Wong and Jeff Goldblum who turn up briefly on opposite sides of the cause. It is also nice to see Geraldine Chaplin in a few scenes working in Lockwood’s manor.

Once the dinosaurs are unleashed, the action is top notch and should enthrall audiences worldwide who can’t seem to get enough of this stuff, even if in the case of lovable Blue the fear factor is reduced in favor of a dino closer in spirit to E.T.

Producers are Frank Marshall, Patrick Crowley and Belen Atienza. The film has already been cleaning up in initial international runs and opens stateside through Universal Pictures on Friday.

Do you plan to see Jurassic World: Fallen Kingdom? Let us know what you think.