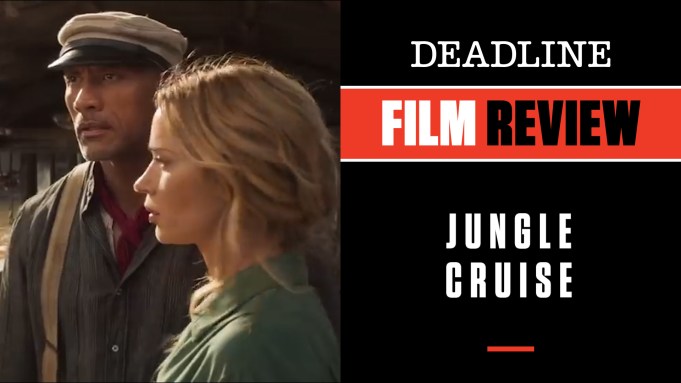 It has been decades since then-Disney head honcho Michael Eisner came up with the idea of turning some of the most storied attractions at Disneyland into movies. The results were decidedly mixed. Pirates of the Caribbean: The Curse of the Black Pearl was a huge hit, got Johnny Depp a Best Actor Oscar nomination and SAG Award and spawned several sequels. Eddie Murphy toplined a so-so Haunted Mansion film version, while The Country Bears was just as miserable in theaters as it was in person.

But none of them was there when Walt Disney opened his fabled amusement park in July 1955. The Jungle Cruise, however was, and 66 years later it is finally really for its cinematic close-up. Thanks to the chemistry of stars Dwayne Johnson and Emily Blunt, much of it works as its intended family entertainment, though it is overloaded with CGI effects that threaten to overwhelm the humans trying to turn this into something reminiscent of the classic Bogart/Hepburn 1951 The African Queen or, more to the point, stuff like Indiana Jones films and particularly Romancing the Stone, perhaps the most accurate template for what director Jaume Collet-Serra and screenwriters Michael Green and Glenn Ficarra and John Requa are trying to emulate.

By the way, Disneyland just reopened its Jungle Cruise a few days ago in advance of the film’s debut, erasing long dated racist and colonialist depictions of Indigenous peoples from Africa. Also now gone — thankfully — are the headhunting, spear-waving tribesmen who uttered lines like, “I will trade two heads for your one.” Fortunately the writers have left a number of other dumb puns the ride’s guides are famous for telling tourists, and they live on from the mouth of Johnson’s Frank Wolff (Johnson), who steers visitors down the Amazon in his ragtag boat La Quila, all the while fighting to stay afloat from competition from Nilo (Paul Giamatti), the Riverboat tour operator who has more modern vehicles (though this is all set in 1917) and who is also gunning to put Frank out of business. Spotting a couple of toucans along the way Frank cracks, “They are paired because only two can play” (get it?). I am surprised the writers resisted including the one I remember from my first Jungle Cruise voyage: “Ladies and Gentlemen, please keep your arms inside the boat because the alligators are looking for a handout.” Ouch.

That kind of thing, plus all the creatures popping up, gave the vintage, then-E Ticket ride its goofy charm and helps the film version as well. Plot-wise it gets convoluted but starts out simply. Scientist and explorer Lily Houghton (Blunt), accompanied by her brother MacGregor (British comedian Jack Whitehall), who is a proper but somewhat bumbling Englishman, enlists Frank to take her upstream into possibly treacherous territory so that she can discover the origins of an ancient tribal artifact she possesses. Their relationship is rocky for much of the film and gets rockier as the boat takes on fierce rapids, an army of soldiers led by Aquirre (Edgar Ramirez) — a man with a connection to Frank that goes “way back” — plus the cartoonishly evil European Prince Joaquim (Jesse Plemons), who leads his team in a quest to get that rare artifact from Lily. It all gets rather ridiculous, even mind-bendingly supernatural, but isn’t that always the way in these bloated enterprises? My favorite supporting player in all this is actually the pet tiger Frank has along for the ride who’s really a pussycat at heart and gives a nice Disney-fied touch to everything.

With Kauai standing in for the Amazon, the movie looks great, and has a terrific signature James Newton Howard score that helps matters. Mostly it is up to Johnson and Blunt to make it work as they battle forces against them, as well as the overly busy special effects. The kids will eat it up. Producers are John Davis, John Fox, Beau Flynn, Dany Garcia, Hiram Garcia, and Johnson. Disney opens it Friday in theaters and for $30 on Disney+. Check out my video review with scenes from the movie at the link above.

Do you plan to see Jungle Cruise? Let us know what you think.