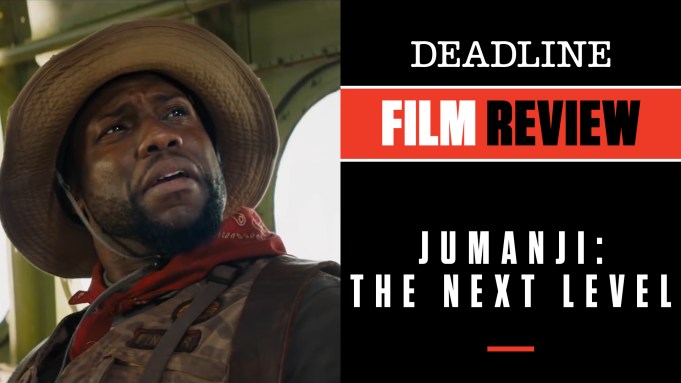 I wasn’t a huge booster of 2017 Jumanji reboot, but clearly I was outnumbered since the film went on to make nearly a billion dollars, so what do I know? I didn’t laugh out loud much during the screening of the new sequel either, but I could tell those around me did, particularly the young critic sitting in my row, so again what do I know?

Jumanji: The Next Level is tailor made for holiday moviegoers, even featuring Christmas scenes. I am not sure it will reach the stratospheric levels of the first, box office-wise, but it has some decent action set pieces, a game cast in every way, some emotional hooks at the end and a few laughs even as Dwayne Johnson does the worst Danny DeVito impression imaginable. That’s right, DeVito invades The Rock in the most unlikely casting he has has had since working opposite Arnold Schwarzenegger as his so-called twin. So here’s the thing: For this to work, you basically have to repeat the conceit that made the 2017 version (itself an updated knockoff of the 1995 original starring Robin Williams) connect with audiences.

In this one, the four teens who were dropped into an alternate jungle universe and into the bodies of a group of bigger star names decide to have a reunion now that they have gone their separate ways to college etc. So Bethany (Madison Iseman), Martha (Morgan Turner) and Fridge (Ser’Darius Blain) are game, which leaves only Spencer (Alex Wolff) dragging his feet. He is a bit lost in life right now, trying to regain the excitement he had when he was in Jumanji, stuck in the body of Smolder Bravestone (Johnson). Instead of meeting up again with his comrades in video games, he goes and finds the old game that thrusts them into this netherworld and sets off to have a new adventure in Bravestone’s body.

Only it doesn’t quite work out that way as we, and he, soon discover he instead is stuck in the body of a common pickpocket (new cast member Awkwafina). His friends, knowing he can’t survive alone, make plans to go find him, but stuff happens and it is Spencer’s grandfather Eddie (DeVito) and his elderly friend Milo (Danny Glover) who get whisked into the action. Soon Eddie, not Spencer, is living la vida loca in Bravestone’s body, while Milo takes up in the zoologist played by Kevin Hart. Jack Black’s cartographer Shelly Oberon now has a new inhabitant when Fridge finds himself in him. Only Martha manages to hook up with her original, the Lara Croft-ish Ruby Roundhouse (Karen Gillan). They all set off to find Spencer and once they do are whisked out of the jungle and into the barren desert. Of course there is the usual villain on their tail, in this case a nondescript and not-very-evil one played by Game of Thrones’ Rory McCann.

The action scenes pile up, including a fun one involving a group of marauding ostriches near the beginning, but most of this is played for laughs as our Jumanji quartet must deal with their new inhabitants. Johnson struggles to find DeVito’s very distinctive voice, but Glover fits Hart’s talents like a glove(r). Awkwafina is a nice addition, if not necessarily given a lot of opportunity to get laughs. Black, on the other hand, is well-teamed this time around, imitating the voice of the teenage Fridge. Gillan again does well with this crew, basically back where she was the first time. Adding to the fun is when Milo is suddenly turned into a horse after the gang gets their own mojo back. This is the best stuff, and also the warmest.

There is absolutely nothing particularly memorable about the Jumanji franchise, but it is modestly entertaining for adults dragged to it, and more than that for their kids. Jake Kasdan directs all the action again from a script he wrote with Jeff Pinkner and Scott Rosenberg. Producers are Dany Garcia, Hiram Garcia, Matt Tolmach, Johnson and Kasdan. Sony opens the Columbia Pictures production on Friday. Check out my video review with scenes from the film by clicking the link above.

Do you plan to see Jumanji: The Next Level? Let us know what you think.