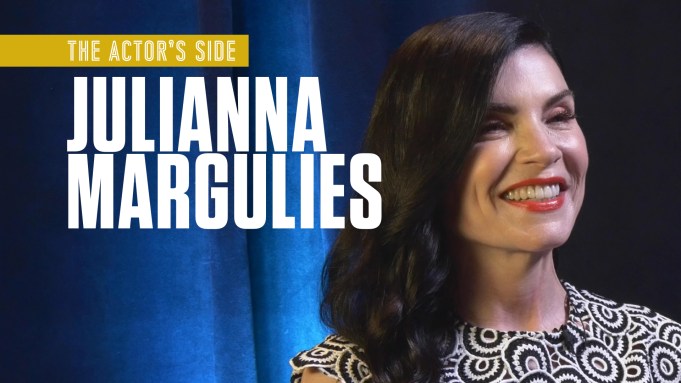 Julianna Margulies is certainly no stranger to award seasons, with her track record of success in terms of nominations and statuettes taken home pretty impressive. She has 10 Emmy nominations, including two wins — for ER (the only cast member to win an Emmy for the series) and The Good Wife, respectively. She has 12 Golden Globe nominations including a win for Good Wife, and she has a whopping 19 SAG award mentions including multiple ER and Good Wife wins. All of this would indicate she has good instincts when it comes to picking a TV series in which to invest many seasons, both those shows being big network hits.

There is a lot to chew on in the career of Margulies, as I discovered when she came to tape this week’s episode of my Deadline video series The Actor’s Side. She holds nothing back and is a whole lot of fun to interview. We cover the waterfront here: detailing her first-ever film role as a hooker (!) no less in a Steven Seagal movie, her early days in acting, and her parents’ reaction to this chosen profession even as she notes she comes from an artistic family.

We also talk about the key moment in college when she knew acting was for real for her, how her grandmother would have loved to see the dream realized of Julianna finally becoming a lawyer (although it was on TV in The Good Wife), and also what surprised her most about the angry reaction to her walking away from a hit series like ER. (Clue to that: After George Clooney left, there wasn’t much more for her that excited the actor inside.)

Of course, we also discuss her new Nat Geo limited series The Hot Zone, which premieres this holiday weekend, the difficulty in delivering complicated scientific dialogue, and why this show about combating the Ebola crisis was worth the effort. Margulies is every parent’s dream as she has become a doctor, lawyer and a scientist (even if it is all for show).

Check out our conversation in the video above. To see past episodes of The Actor’s Side, click here.