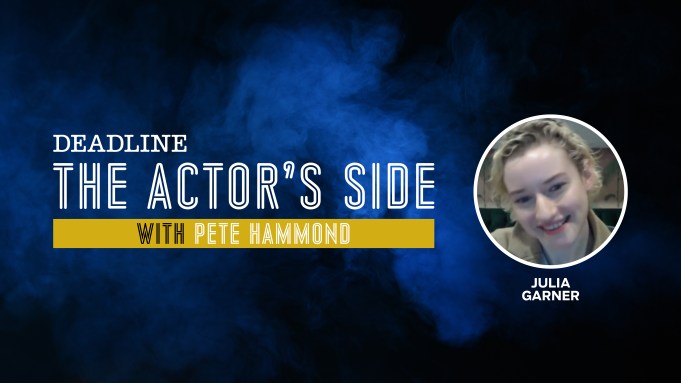 There is no question that Julia Garner is on a roll right now. In a conversation for this week’s edition of my Deadline video series The Actor’s Side, Ozark’s “bad” girl Ruth talks about why the Netflix series has become instant water-cooler conversation and one of TV’s most watched shows, how the current pandemic may have played into that, what it is like keeping up with the evolution of her character on the show, and how Bette Davis is a role model for her.

She also dishes on the Emmys by surmising that not getting nominated in Season 1 was the best thing that could happen to her career, while winning for Best Supporting Actress in a Drama Series was something she never thought about. Oh, and there is that little anecdote about being onstage accepting that Emmy and suddenly being terrorized by a certain Oscar-winning superstar couple in the audience.

She also talks about playing the lead title role in the indie movie hit The Assistant and how the Harvey Weinstein scandal informed her performance. We also discuss playing the lead in the first Shonda Rhimes project for Netflix, the limited series Inventing Anna currently shut down due to the coronavirus work stoppage.

Garner also gives a key tip she learned in her acting class that she carries onto every set — especially that one. To find out what it is and to watch the rest of our conversation, check out the video above.