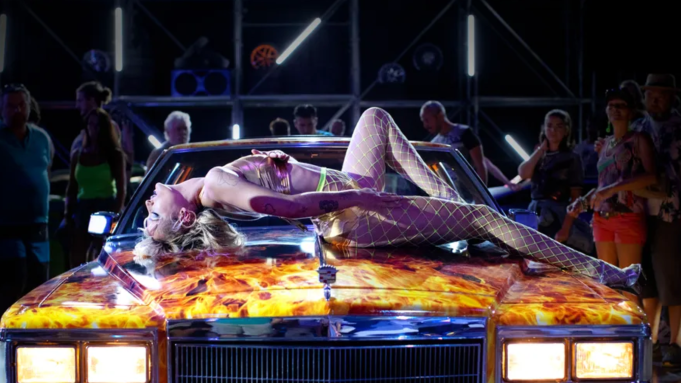 Between rocking the Cannes film festival with her surreal, ultraviolent serial-killer thriller and picking up the Palme d’Or, director Julia Ducournau and cast members Agathe Rousselle and Vincent Landon found time to speak to Deadline about the genre mash-up that divided critics but united Spike Lee’s jury. Ducournau explained that the first seed of her story, which involves Rousselle’s psychopathic dancer posing as a missing boy and seemingly fooling his distraught father (Lindon), came to her as she was wrapping things up on Raw, her cannibal-themed 2016 Critics’ Week hit.

“I was in post-production with Raw,” she recalled, “and when I spend so much time with a film, I, personally, need to think of other stories, because otherwise, I go crazy. And I was reflecting on Raw and I was a bit frustrated with the fact that I didn’t tackle the topic of love as directly as I wanted to at that moment. So I wanted to put love at the center of my next film, that’s one thing that I knew.”

After that, she said, “it’s really a patchwork of thoughts. There was really nothing super-clear like, ‘Oh yeah, I got it, I got my film.’ Not at all. [For example] I thought about a nightmare that was recurring. I don’t have it anymore, but that I used to have, of me giving birth to car engine pieces. It was incredibly distressing, but I always thought, ‘That’s a nice image. I like that.’ But at the same time, I’d be shaking like crazy!”

Recruited via Instagram for her androgynous looks, Rousselle explained that she’d worked hard for the role, which required a lot of punishing physicality. “I prepared both physically and, let’s say, mentally with Julia,” she said. “We rehearsed a lot with monologues from Network or monologues from Twin Peaks. We worked on that just because my character doesn’t speak at all. And so we would just work on a range of emotions like that. And then I had, of course, a lot of training, so I had to lift a lot of weights and also do dancing training because I am nothing close to a dancer. So we worked on that for two months. It was really intense, but it was really worth it—because now I can twerk!”

Just as surprising as Ducournau’s storytelling is the appearance of Vincent Lindon, an actor usually seen in more sober French dramas. He said, “Julia told me, ‘I’m writing a script right now—I started it two years ago, but I want you. It’s for you, you have to do it. If you don’t do it, I will still do the movie. But I hope you will say yes.’ It’s the first time in a long, long time that a director has given me such a gift.”

To hear more about Titane, watch the video above.