Continue to Deadline SKIP AD
You will be redirected back to your article in seconds
Skip to main content
September 23, 2019 4:38pm
5Comments 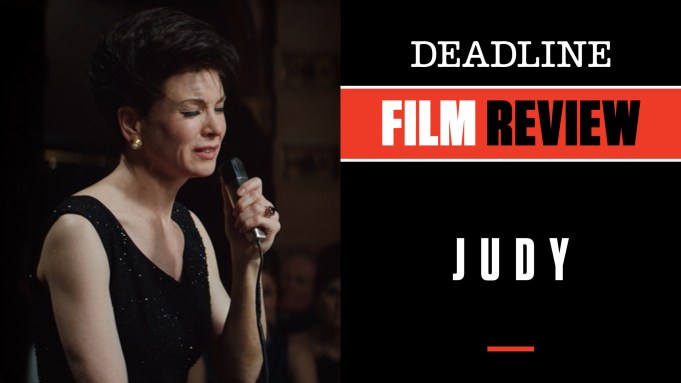 The new film Judy chronicles Judy Garland in her final months as the troubled star performs her last set of concerts at London’s Talk of the Town. But what it really does, thanks to star Renee Zellweger’s simply remarkable performance in the title role, is to dig deep into the soul of this legendary superstar to discover the person few knew outside of the tabloids at that time.

Make no mistake about it, Zellweger’s immersion into Garland’s persona is so convincing and heartbreaking that you won’t be able to take your eyes off of her for a minute. She had me at “Get Happy,” just one of the many songs she sings in a way that doesn’t imitate Judy (there are enough of those) but gets right to the essence of what made her so great: the way with a musical phrase, a perfectly hunched body movement, a fierce passion for whatever she was performing. Zellweger says she doesn’t consider herself a singer (Chicago might prove her wrong), but there’s not a false note in the way she channels Garland both on- and offstage.

Based on Peter Quilter’s play End of the Rainbow, the screen adaptation largely has decided to change things up and not make this as much of a Judy Downer story as it came off in the theater. Virtually no dialogue from the play remains, but the basic premise does. It takes Garland to London for those final shows, a somewhat desperate move in order to save her home and keep her custody rights for her three kids — something ex-husband Sid Luft (Rufus Sewell) is threatening to take away due to her unstable ways and dire financial situation. Always the trouper, she does what she has always done, to sing for her supper, ever since she was a child star in The Wizard of Oz and heavily manipulated by the studio. Director Rupert Goold and screenwriter Tom Edge deal with that aspect, unlike the play, by adding several flashback sequences to show how the young Judy was treated at her studio and by its leader, who clearly did not have her best interests front of mind.

Darci Shaw plays the younger Garland and does her best but seems closer to a young Elizabeth Taylor looks-wise. These sequences are the least realistic in the film, but that is only a minor qualm because Goold invests most of Judy with a very empathetic look at a fragile and vulnerable person — one who never tries to bring less than her all to her work but sometimes is clearly defeated in the attempt. It is hard to believe, but some of those audiences booed her and pelted her with bread crumbs instead of understanding that she was not in a good place. Garland’s one-time son-in-law Peter Allen once wrote a song inspired by this, “Quiet Please, There’s a Lady on Stage.”

Although it is Zellweger’s show all the way, the supporting cast is fine including a sympathetic figure named Rosalyn Wilder played nicely by Jessie Buckley. The film also details Garland’s final marriage to the much younger Mickey Deans (Finn Wittrock), who is another in a long line of people in her life who shouldn’t be there. Still, it’s touching to see her trying desperately for the pure happiness that eluded her so much of her life. The wedding sequence is poignant. Yet, as I say, this movie is not out to depress us but instead, in the hands of Zellweger, delivers a portrait of a great star who sadly lost the battle to “get happy.”

David Livingstone is the producer. Roadside Attractions opens it Friday. Check out my video review at the link above with scenes from the movie.

Do you plan to see Judy? Let us know what you think.