Continue to Deadline SKIP AD
You will be redirected back to your article in seconds
Skip to main content
February 22, 2021 1:24pm 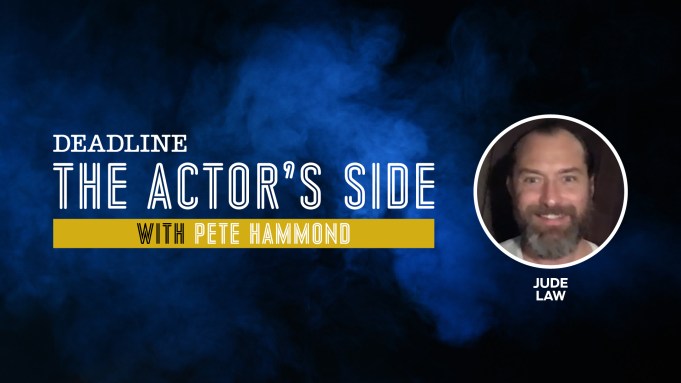 Jude Law has been dealing lately with filmmaking in the era of Covid as production has continued in England on the third Fantastic Beasts film in which he again plays Albus Dumbledore. Actually, since we spoke, it was shut down again due to a case of Covid on the set, but it is nearing completion.

As an actor who has appeared in a number of huge-scale films like this Warner Bros franchise, Marvel’s Captain Marvel, the Sherlock Holmes franchise and more, Law tells me he likes to break his projects up, going back and forth between behemoth movies and smaller indie movies, like his latest The Nest, which has gathered both he and co-star Carrie Coon awards buzz as a couple whose marriage is starting to crumble when he moves the family from New York back to his native London. Both give extraordinary performances here, and as I say in today’s edition of my Deadline video series The Actor’s Side, this might be the best Law has ever been on screen, or at least close to it.

Our conversation covers many facets of his career which has included a large number of significant movies right from its beginning including a breakthrough, Oscar-nominated turn as Dickie Greenleaf in Anthony Minghella’s The Talented Mr. Ripley, followed by another Oscar-nominated role in Minghella’s Cold Mountain. Law tells me about the unique influence the late director had on his career, working on his first miniseries The Young Pope and The New Pope with Paolo Sorrentino, balancing his choices now that he is older and wiser, the emergence of new platforms for adventurous adult filmmaking like The Nest, and so much more.

To watch our conversation and get Jude Law giving us his Actor’s Side of it all, click on the video above.