Alec Baldwin Speaks Out After Prop Gun On 'Rust' Set Kills DP Halyna Hutchins: "There Are No Words"
Read the full story
June 22, 2018 11:18am
5Comments 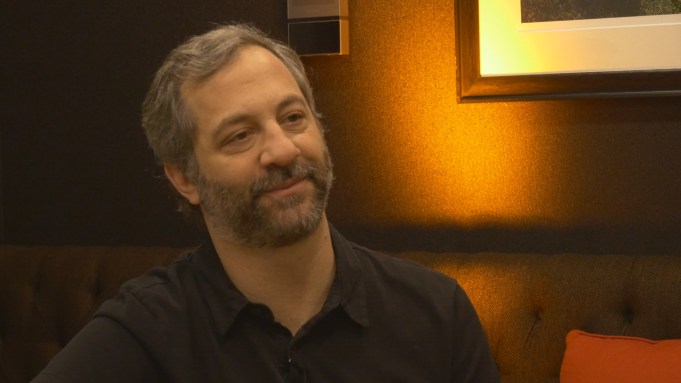 With a vibrant producing and directing career that has spawned hit movies like Trainwreck, The Big Sick, Knocked Up, The 40-Year Old Virgin, Bridesmaids and series like HBO’s Girls, Love, and Crashing, how does Judd Apatow have time to take a detour back into the world of stand-up comedy that he did from age 17 to 24? Add to that his very personal documentary project — the 4 1/2-hour HBO docu The Zen Diaries of Garry Shandling — and you find there is a lot to talk about.

That is what we did when I visited Apatow’s West Los Angeles offices for the latest episode of my Deadline video series Behind the Lens. Apatow is in the Emmy conversation this year, not only for the Shandling docu but also for his Netflix comedy special Judd Apatow: The Return, a hilarious stand-up show he taped at Montreal’s Just For Laughs and something he says he had always wanted to do. We discuss both those projects, and in particular why Shandling, who gave Apatow his first writing break on the Grammys, was so influential and important to so many careers including his.

We also talk about why the world of comedy and comedians is so prevalent in his own work, ranging from the comedy specials he produces to shows like Crashing and movies like his own Funny People and The Big Sick, the latter of which he produced to lots of awards attention last year. We also explore why working in the world of HBO and the streamers now is far preferable to commercial networks, which didn’t give him the freedom he craves on these other services.

To listen to my conversation with one of the most successful producers in the business, check out the video above.