Continue to Deadline SKIP AD
You will be redirected back to your article in seconds
Skip to main content
August 6, 2020 4:13pm 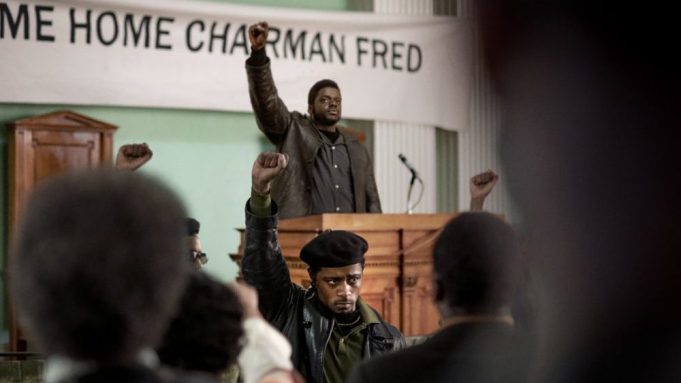 With that, the first look at the Shaka King-directed Warner Bros pic is a timely and quiet storm of power, rage and an inspiration for change. The first trailer for the pic debuted Thursday at a joint conference between the National Association of Black Journalists and National Association of Hispanic Journalists. It was followed by a conversation with Shaka King, producers Ryan Coogler (Creed, Black Panther) and Macro’s Charles D. King (Just Mercy, Sorry to Bother You, Fences) as well as Chairman Fred Hampton, Jr. They unpacked what it was like making this film and what it means to be released at a time of civic unrest and social change.

Judas and the Black Messiah tells the story of Illinois Black Panther Party Chairman Fred Hampton and William O’Neal, the undercover FBI informant who helped bring him down. When Shaka King first pitched the project to Coogler when they met Sundance and he was blown away. “Chairman Fred Hampton is somebody whose life work and the story of his assassination has been relevant since the day it happened,” said Coogler. “It only continues to be more relevant with context.”

Right around the time Coogler finished Black Panther, Shaka King gave him and his wife Zinzi a call and asked them to be producers. From there, Coogler immediately called Charles King at Macro because he knew that would be a perfect home for this film before it went to a studio.

“I also think Shaka’s point of view and how he wanted to tell the story is also something that is relevant as well,” said Coogler. “It was a project that Zinzi couldn’t get out of our heads.”

Charles King added: “I knew a little bit about Chairman Fred Hampton, but nowhere near as much as I should know. I was already a huge fan of Shaka’s work so the opportunity to be a part of telling this story — it’s what Macro is all about; supporting these kinds of incredibly compelling, authentic stories about our community.”

“When I read the script, I was blown away by it,” he continued. “I was honored to be asked to be a part of this. It only continued to enhance as we got to spend time with Chairman Fred and Mother Akua Njeri.”

For Chairman Fred Hampton Jr., the son of the main character in the film, he talked about how it was entrusting these filmmakers to tell his father’s story. “It wasn’t an easy conversation. Lots of days, nights and hours of dialogue; background checks — what we call taking people’s community credit cards,” he laughed.

“Legacy is more important to your life,” said Hampton. “We attempted to put the proverbial pill in the applesauce. Chairman Fred and the Black Panther Party was a revolutionary organization. It is a balancing act to get this relevant information that many people have been deprived of — not ‘role models’ but ‘real models’, those who came from the community and the impact that they had.”

Shaka King also said that it was a balancing act to make the film and addressed the challenges and responsibility to tell Hampton’s story. It was important to have Fred Jr. present on set every day even when it was difficult. There were times when they had to rewrite things on the fly to pay respect to the people involved in the story.

“I think, for me, it started with the intention of what we were trying to convey and choosing to tell this movie not just from the perspective from Chairman Fred but also to include William O’Neal,” he said.

“To me, the movie is, in a lot of ways, the capitalist in William O’Neal and the socialist in Fred Hampton…and the coward in William O’Neal and the revolutionary in Fred Hampton,” he stated. “I try to attach judgment to both of those ideologies but most people fall somewhere in between. You want to make a movie where the audience watches it and [walks] away questioning ‘Where do I fall between those two?'”

Shaka King said that casting Kaluuya as Hampton and Lakeith Stanfield as O’Neal was intuitive. However, he is aware of the debate of casting Black British actors to play Black American icons. He points out that it’s all about a shared perspective. “I’m born in America, my family is Caribbean and I got a South African name,” he said. “I’m literally emblematic of this diasporic way of thinking. We have a lot more in common than what people think with experience and trying to overthrow white supremacy.” He continues to say that the Black Panthers were a very international organization and said that he can’t there would be an objection on the casting.

The film is centered on two Black men, but as Coogler said, being from the area in Oakland where many Black Panther movements took place, there were many women who were instrumental in the rebellion. “There’s a history of the party taking a different approach to age and gender that was very much ahead of its time,” said Coogler. “My aunties and my grandmother were affected by it…to make a film that didn’t give credence to that would be a mistake.”

Shaka King chimed in, “If there is anything we could have done a better job of is having more powerful roles for the women. We have two major ones one is Deborah Johnson, now known as Akua Njeri (played by Dominique Fishback in the movie) and a made-up character that was portrayed by Dominque Thorne. They definitely have a presence in the movie and the job that they did is truly incredible.”

It is no question that the revolutionary spirit and push for progress of the film reflects the current landscape. The film was made prior to George Floyd’s death and the protests that followed and are still happening. “As much as the movie is of the time, in my mind, it will never be behind the time,” said Shaka King. “I’ve never been in this position where the attitude of the audience is caught up to the message you’re trying to convey.

He adds that he just doesn’t think about what audiences will take away from the movie now, but he asks what will they take away one or five years from now. “Who knows what the world will look like when this movie comes out — or what the culture will look like,” he said. “The message in the movie is consistent in the movie no matter when it’s viewed. You can either be Chairman Fred or you can be William O’Neal or you can be somewhere in between.”

“You look at the choices that William O’Neal made and how those impacted his life,” he said. “This is as great a lesson to take away as being inspired by the story and revolutionary spirit of Chairman Fred.”