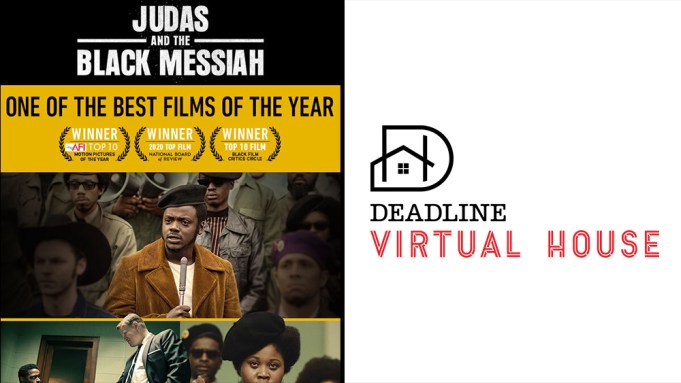 “I had to really grow as a man to inhabit the words,” said recent Golden Globe winner Daniel Kaluuya, who stopped by Deadline’s Virtual House to talk about his role as the incomparable activist Chairman Fred Hampton in Judas and the Black Messiah.

Kaluuya said was he “kind of taken aback,” as he was doing a deep dive into the Chicago Black Panthers leader’s life. “I’ve never met anyone that thinks like this, that actually thinks this clearly and freely and articulately and excessively.” He concluded, “I think there’s a Fred Hampton in everyone, in terms of someone that has the capacity to deeply love the community and deeply serve them.”

His co-star Dominique Fishback also channeled Hampton, who was killed in a 1969 Chicago Police raid, in her preparation for the role as Deborah Johnson.

‘Judas And The Black Messiah’ Director Shaka King Corrects Misinformation About Black Panther Party, Focuses On Their “Vision For Bettering The World”

“One of the things that Mama Akua [Njeri] talked about — formerly known as Deborah Johnson — she said that the Panthers were very disciplined and they didn’t speak out of turn and that there were some things in the script that my character says that she wouldn’t say,” Fishback said. “And so for me, it was about finding my way into that. Because the character needs to say certain things so that she had urgency in terms of storytelling in terms of the women’s voice. But how could I do it in a way where however Mama Akua read it on the page is not how I say it?”

She added, “It allowed me to think about trust and how Chairman Fred warrant trust out of people. And when you have that kind of trust, you don’t have to be defensive or on guard.”

In the film, director and co-writer Shaka King chronicles the lives of Hampton, chairman of the Illinois chapter of the Black Panther Party, as well as William O’Neal (played Lakeith Stanfield), who served as an FBI informant to help silence Hampton and the Black Panthers.

“You could also highlight who Fred was by showing who he wasn’t and William O’Neal,” King said of the decision to tell the story from the point of view of O’Neal and Hampton.

“It gave us a little bit more leeway in terms of making this a movie about ideas and about two people who, in a lot of ways, desired freedom and power but had very different definitions of what those two things were and how to go about acquiring them — which I think are questions that we still wrestle with culturally,” he added.

“I personally would hope that people would take is understanding the incredible work and the voice that Chairman Fred had at 21 to uplift his community,” the mega-producer remarked.

He continued, “That spirit, just like the spirit of those that were out on the front lines last summer, standing up on a global level for racial equality and for community and against oppression, that the people too could be moved to use their voice. And that this also could be a moment in time, just like when Chairman Fred Hampton was bringing a coalition together, that the same thing is possible, and that with that coalition, real change for our communities here in this country and globally can happen.”

Judas and the Black Messiah is currently in theaters and streaming on HBO Max.

Sundance Review: Daniel Kaluuya And Lakeith Stanfield In ‘Judas And The Black Messiah’