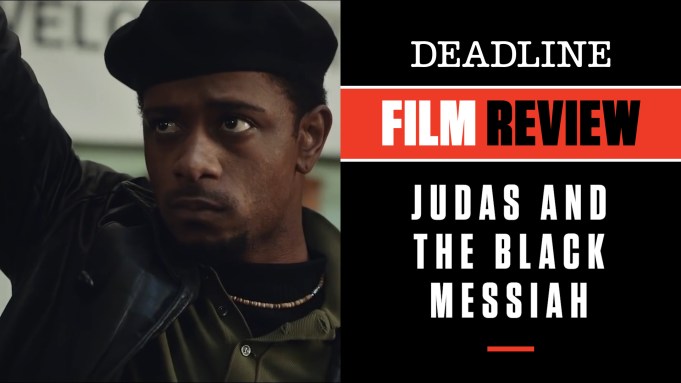 In a new era of political division and protest, Hollywood has seemingly rediscovered the late 1960s and its uproar in the streets as a way to mirror what American society is experiencing now. On the heels of Aaron Sorkin’s brilliant The Trial of the Chicago 7, we now have another true story of the government trying to quell the rising voices of dissent, in this case with the controversial Black Panther movement in the same time period. Director Shaka King powerfully takes it on and gives it gravitas in the eye-opening Judas and the Black Messiah. Daniel Kaluuya stars as Fred Hampton, the young charismatic chairman of the Black Panthers chapter in Illinois, and Lakeith Stanfield is William O’Neal, the troubled young man who infiltrates his organization as an informant for the FBI, which is targeting the group, and particularly Hampton, as radical terrorists who are a threat to national security.

Actually, Hampton is a minor player in Trial of the Chicago 7, seen sitting behind and conferring with fellow Panther Bobby Seale, who is part of the group on trial; Hampton in fact was assassinated as that circus of a trial was going on. But here we get a full-fledged portrait, and we get to know the real Hampton as an extremely polished and effective speaker for his cause, an expert rallier to his side who knows how to whip up the followers and has smart ideas to perhaps take the Black Panthers to another level.

Signing up when he was a student in a Midwestern college he rises through the ranks fast — so fast he catches the eye of the notorious FBI head J. Edgar Hoover (Martin Sheen), who enlists a dedicated and self-styled beacon of morality, FBI Special Agent Roy Mitchell (an excellent Jesse Plemons), to stop the Panthers and Hampton who Hoover sees as an emerging threat. Plemons finds O’Neal — accused of impersonating an FBI agent and driving a stolen car over state lines — as a perfect foil to infiltrate the Panther organization and its most progressive chapter in order to get to the heart of Hampton’s operation so they can take him out. Facing the choice of either cooperating or spending seven years in prison, O’Neal finds himself sucked into the plan, an uneasy accomplice conflicted between what he increasingly sees as Hampton’s and the Panthers’ noble causes and his own desire for the nicer life he sees in Mitchell’s world. He’s complex, torn between two paths and walking a very dangerous tightrope. He is Judas and Hampton the Black Messiah, the latter the description Hoover uses to tag the group he is trying to bring down.

Joining co-screenwriters Will Berson, Keith Lucas & Kenny Lucas, King skillfully lays out each side of the equation in this raw and exciting account set in 1969: the emerging force of the Black Panthers, seen as a threat to Hoover’s view of  the world, and Hampton’s belief in the power in the people to lift themselves up toward equality and justice in a society that is being ripped apart. Kaluuya again demonstrates exceptional force as an actor, particularly effective in re-creating Hampton’s speeches, so self-assured at only 21, sadly presenting a man cut down before he could go on to greatness. But it is Stanfield who really has the most challenging job here, trying to navigate both sides without imploding, a flawed man tragically deceiving himself and everyone around him. Stanfield is sensational in the role, a career best to date. Also very fine is Dominique Fishback as Hampton’s fellow revolutionary and emerging love interest, fiercely dedicated and nine months pregnant.

In the circle around Hampton are a number of other fine players including the rage-filled Jimmy Palmer (Ashton Sanders), the enthusiastic follower Jake Winters (Algee Smith), security captain Judy Harmon (Dominique Thorne) and co-founder of the Illinois Panthers Bobby Rush (Darrell Britt-Gibson). Lil Rel Howery also has his moments as Wayne, who encounters O’Neal on the nighttime streets of Chicago.

Check out my review above with scenes from the film. Do you plan to see Judas and the Black Messiah? Let us know what you think.