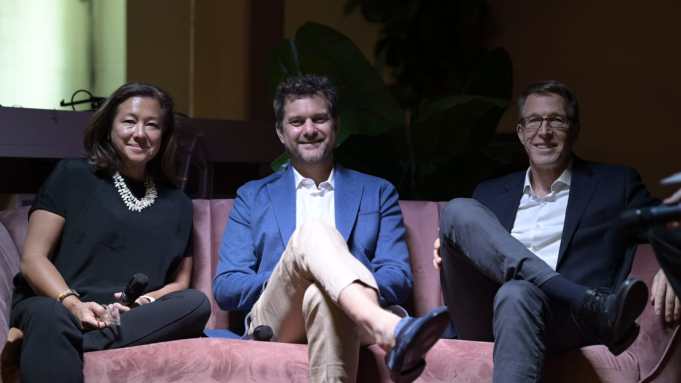 Content spending between Netflix, Hulu, Amazon and HBO went from $23.1 billion in 2018 to close to $46B last year as Disney+, Peacock, and HBO Max got involved in the mix.

Yet through it all, indie fare, especially in the production pipeline, falls to often through the cracks. Various projects get talent attachments, become 60% funded, but never make it across the finish line to rolling before the cameras.

Dawson’s Creek and The Affair alum Joshua Jackson is looking to revolutionize that with Liquid Media Group, the multifaceted Nasdaq publicly traded studio (YVR) he’s the Co-Founder, Chairman and Independent Director of.

“The company started when I was 13 years old, when I started in the industry,” says the star of Cruel Intentions and Hulu’s Little Fires Everywhere. Jackson has always seen a “massive disconnect between the enormous amount of talent” and “the ownership of that talent” when it came to their own creative product.  Jackson sat down with Deadline at our TIFF Studio with the CEO and Director of his corp, Ronald Thomson, and Indieflix CEO & Co-Founder, Scilla Andreen; the latter an education streaming service content company which Liquid Media acquired recently.

Jackson is encouraged by the boom in streaming content and the “significant shift from where I started in the early ’90s to the digitized online version of the industry.”

The actor with Liquid Media is looking to create an easier path for filmmakers to get their content in front of audiences, while allowing them ownership in their content across all ancillaries, so that “you survive and tell another story.”

“I’ve seen the variety of different ways in which the system doesn’t encourage or reward the people doing the hard work,” adds Jackson, “(For a distributor) you’re just another piece of product that they’re putting out there in the world.”

Liquid, in addition to financing, looks to provide filmmakers with access to tools that other studios have, i.e. marketing analytics, so that filmmakers can determine their P&A, and distribution platforms such as Projektor.

Imagine for a moment being a short filmmaker whose movie was nominated or won at the Oscars and being able to have a stake and reap the financial rewards in that pic’s destiny. That’s where Liquid Media comes in.

“We’re empowering you with the opportunity to have some control over your destiny,” says Jackson, “You become responsible for that last phase and getting in front of the audience.”

Take a look at our conversation with Liquid Media Group above.