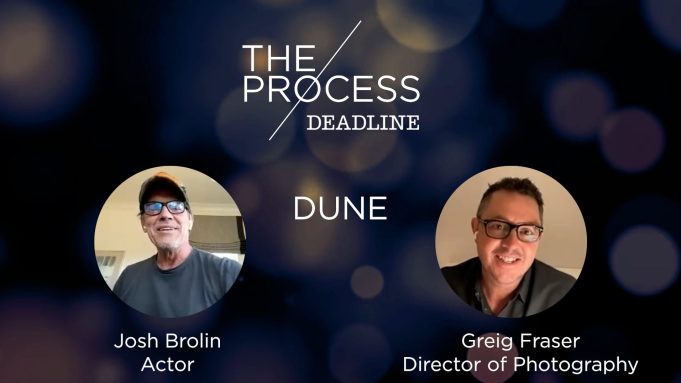 After being given the “huge honor” of shooting Dune, cinematographer Greig Fraser put “a lot of pressure” on himself to deliver the best work possible, given the fact that this was the “dream film” on the part of director Denis Villeneuve.

“On this particular film, I was very diligent about eating well, exercising, staying good in the mind, staying sharp, staying as slept as I could,” he says in the latest edition of Deadline’s video series The Process. “I was a little bit like a monk, short of self-flagellation…I would be very, very still every night.”

Fraser’s basic strategy, in fulfilling Villeneuve’s vision of the project, was to “burrow into his psyche” and his core feelings about it—carefully observing what the director was telling him both through his words, and through the lack thereof.

The intimate sci-fi epic brought to life in such countries as Hungary, Jordan and Norway adapts Frank Herbert’s classic 1965 novel of the same name. It tells the story of Paul Atreides (Timothée Chalamet), the son of a noble family who is thrust into a war within the deserts of the inhospitable planet Arrakis, after finding himself entrusted with the protection of the most valuable asset in the galaxy.

In his first outing with Villeneuve, Fraser would come to bond closely not only with the visionary filmmaker, but also with cast member Josh Brolin. The Oscar-nominated actor came to the project after collaborating with Villeneuve on 2015’s Sicario and here would be portraying Gurney Halleck, a warrior in service of House Atreides.

Brolin shares in conversation with Fraser on The Process that he was always mesmerized on set as he watched the DP work, and found him to be similar in spirit to other legends of the craft, like Roger Deakins, that he’d encountered on past projects. What the actor admired, in particular, was Fraser’s love and knowledge of, and dedication to the art of storytelling, and the way he approached it without ego.

When Brolin watches Dune now, he’s struck by just how “emotional” and “character-driven” the film is, and by the visual universe that Fraser helped establish. “What I’ve found about Dune is…I felt like I felt when I read Martian Chronicles for the first time as an eight-year-old. I was literally thrown into a world that was more attractive to me than the world I was living in, and that’s really fun,” he says. “It’s not just escapist, but it’s a type of emotional core that you want to immerse yourself in. It’s a playground you definitely want to play in and find out more about.”

In spite of Dune’s massive budget and the spectacular level of production value manifest in its desert vistas, to both Brolin and Fraser, the film is at its core about family. In the end, Fraser says, this adaptation has succeeded because both the film and those making it were “invested ”first and foremost in the people at its center.

Fraser years ago ascended to the upper echelon of cinematographers. He has been honored over the course of his career with an Oscar nomination, an Emmy and Camerimage’s Golden and Bronze Frog, among other accolades, and is a frontrunner to win this year’s Oscar for Best Cinematography for his work on Dune. Still, he admits that even he is mystified by the power and practice of cinematography, with regard not only to the Warner Bros. epic but to all projects he’s taken on. “It’s some magic where you move a light into a certain position and it feels a certain way, but you can have it three centimeters off and it changes the tone and feel completely. So, it still is quite amazing to me,” he says. “The art of lighting is still something that I’m working at, trying to perfect and trying to get really good.”

Even if Brolin joked during his chat with Fraser that he hadn’t yet sent his “gift basket” to Villeneuve, in a bid to be invited back for the Dune sequel announced in October, it appears that both artists will be returning for the second installment, with Brolin relishing the chance to work alongside Fraser yet again. “I tip my hat to you, man, because…you’re a great cinematographer, but an even better human. It’s fun to be able to do this with children who are addicted to discovering,” he says. “It feels like we’re all just running around, really kind of fastened to the idea of discovering and creating and seeing how we can exploit humanity at its best and its worst. I think both are necessary.”

In his time on The Process, Fraser delves deep into the process of prepping and shooting Dune, touching on Villeneuve’s “ability to make something great extraordinary,” why he was always drawn to cinematography over still photography, the great degree of cinematic inspiration that he’s taken from Lynne Ramsay’s 1999 film Ratcatcher, why “we’re at a precipice in filmmaking,” his and Brolin’s shared love of Grease, and the relationship they both have with iconic cinematographer Roger Deakins, who Brolin refers to as “the George Jones of country music, what every country music singer wants to be like.”

Brolin speaks for his part to his own explorations of photography, his instinct-driven approach to crafting characters, getting into acting by accident at age 16 and why it’s “the greatest drug” he ever took, learning to trust Villeneuve on the set of Sicario after initial misgivings about the director and working with him to fine-tune his dialogue, and why Dune may be the “starting gate” into a new world of filmmaking. He also discusses his experience playing Thanos in multiple Avengers films, initial “tension and strife” in his first collaboration with his hero Denzel Washington on American Gangster, his admiration of Alejandro González Iñárritu’s “genius” VR creation Carne y Arena, his thoughts on Daniel Day-Lewis’ retirement, the upcoming Max Marbakow film Brothers, in which he stars alongside Peter Dinklage, Brendan Fraser and Glenn Close, and more.