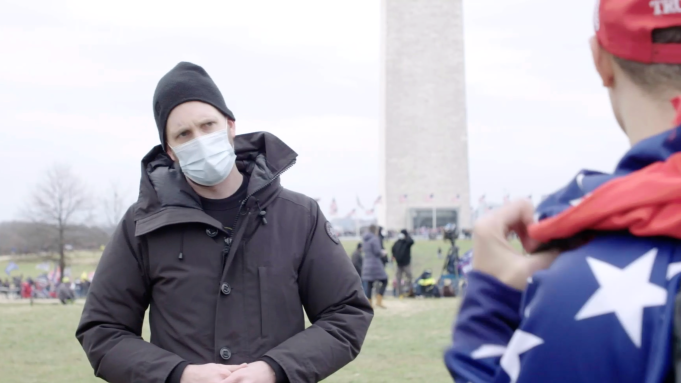 Jordan Klepper has been covering Trump rallies for The Daily Show since 2016 but this might be his scariest segment yet.

The comedian filmed in Washington, DC last week to cover the chaos and attacks on the Capitol.

The latest instalment of Jordan Klepper Fingers The Pulse will air online and possibly on the Comedy Central show when it returns from hiatus next Tuesday.

Klepper, whose compilation of memorable moments has recorded 142M views online, points out that if the violence shouldn’t have been a surprise given violence at previous Trump rallies, “the message isn’t exactly subtle”. He interviews a man carrying a pitchfork and laughs at a member of the mob travelling by Segway, but also has to contend with people attacking his crew.

He lays the blames at the feet of “human blowtorches” Trump, his son Donald Trump Jr. and Rudy Giuliani. He says,“This thing was a powder keg, all took was for someone to light the fuse, like these human blowtorches.”

“If the Trump presidency was going to come to an end, this seems fitting, a show of aggression, ending with a bunch of people screaming at a building without a working understanding of how democracy works. America, 2021,” he adds.