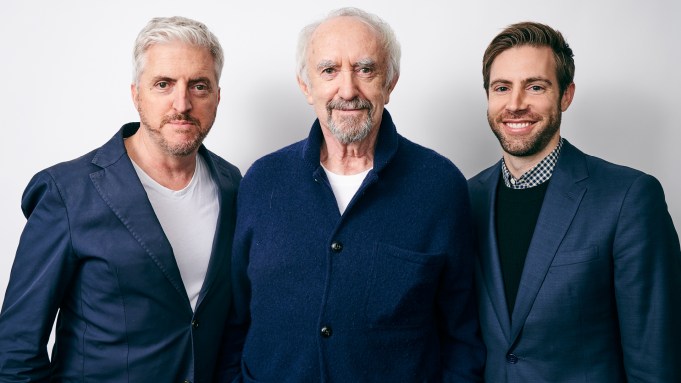 Jonathan Pryce had a leg up playing the leader of the world’s Catholics in the Netflix film The Two Popes. Everyone tells him he and Pope Francis look identical.

“The day he was created Pope, yeah, the Internet was full of images of the two of us together, Pope Francis and me…Even one of my sons called me and, just to make sure, he said, ‘Dad, are you the Pope?’ ” Pryce said recently at Deadline’s The Contenders New York awards-season event. “It seemed inevitable somehow from that that I should play him.”

Pryce stars alongside Oscar winner Anthony Hopkins — the latter playing Pope Benedict XVI, the first pontiff to voluntarily resign in more than 700 years. The film is directed by Fernando Meirelles and written by Anthony McCarten.

“I started thinking about the fact that Popes are meant to be infallible and these two [Francis and Benedict] can’t agree on almost anything, and we’ve got two co-existing, and I thought this is a sort of interesting theological conundrum,” McCarten told the DGA Theater audience of Academy and guild voters. “I went back and started this as a play, as a debate between a conservative and a progressive, because I thought that might be interesting given that there’s such huge polarization between those two camps.”

Producer Jonathan Eirich noted that Meirelles had expressed interest in potentially doing a film about Pope Francis, but wasn’t sure how the story could be told until he read McCarten’s play.

“I think what he really responded to was the humor…but I think that humor that allows you to sort of disarm an audience and talk about some of these more complicated issues,” Eirich said. “We actually sold it as a pitch to Netflix and then developed the script all together and then, fortunately, got our top two choices as actors to play these amazing roles.”

Pryce researched Pope Francis in part by speaking with people who knew him from his native Argentina, well before he became Pope. They offered a different view of the man than the commonly held perception.

“They didn’t recognize him when he was elected Pope [appearing] on the [Vatican] balcony because he was smiling. And they knew him as the man who never smiled,” Pryce said. “So you put that with footage that I looked at of him when…he was being questioned by his cardinals about his possible involvement with the [Argentinian] junta and you see…quite a serious and quite angry, impatient man, quite unlike the figure we see today. Except the only image I have of him looking quite so grim was when he’s standing next to Donald Trump having his photograph taken. So it was very good to find out that dark side of him and to go on that journey to the Pope we — most of us — know and love.”