Continue to Deadline SKIP AD
You will be redirected back to your article in seconds
Skip to main content
August 31, 2019 10:15am 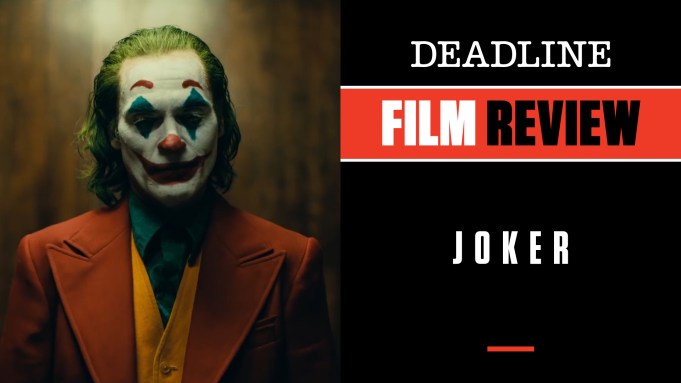 Jack Nicholson, Jared Leto and Cesar Romero in the ’60s Batman series are among the many actors who have taken a shot playing the iconic DC Comics supervillain. Heath Ledger took it in a different direction in The Dark Knight and won a posthumous Supporting Actor Oscar, and now Joaquin Phoenix gets his turn as the character in the stand-alone origin movie Joker in a bravura piece of filmmaking that speaks to the world we are actually living in today in ways that few movies do. If you thought you knew Joker before this Joker, think again.

Phoenix is all in and then some, a performance so dazzling risky and original you might as well start engraving his name on the Oscar right now. No joke, this is a movie — premiering today at the Venice Film Festival — unlike any other from the DC universe, and you will find it impossible to shake off. At least I did.

In some ways this is a movie that is uncomfortable to watch, and though other films from comic book origins have gone to deep places that reflect the time in which they were made while staying true to their own origins, this one dealing with a very dark and unforgiving Gotham City in the 1980s could have been set in the present as it dives into a world of madness in the character of Arthur Fleck as he eventually morphs into Joker. In cinematic terms, he might be something of a cross between Travis Bickle and Rupert Pupkin, the roles played by Robert De Niro in Martin Scorsese’s Taxi Driver and The King Of Comedy.

But director Todd Phillips (The Hangover) and co-writer Scott Silver have more on their mind, and along the way — with Phoenix’s extraordinary performance — say much about how a killer is born. And though Joker becomes a vicious one, it is clear just what created him, and that includes a society that simply does not care about people like him. Like no recent film I can recall, this one says much about our treatment of the mentally ill, a condition blamed by many of our current leaders as the reason a loner with a gun goes on a shooting rampage..

There is one particularly frightening scene in which the Social Services therapist (Sharon Robinson) Arthur sees regularly informs him they are shutting down due to lack of government funds. “They don’t care about people like you, they don’t care about people like me,” she tells him. Arthur is a guy, clearly disturbed, who suffers from a weird chronic laugh, lives with a mother who has her own mental illness, grew up without a father and works as a party clown in a down-and-out dive. He is bullied, laughed at, beaten up, but still has dreams of being a famous stand-up comic, though his material is pretty dreadful.

Nevertheless, he catches the eye of Johnny Carson-like talk host Murray Franklin (De Niro, in an ironic, perfectly pitched turn), who sees a viral video of his pathetic act and invites him on his show — not to laugh with him but rather at him, much the same way Carson once had Tiny Tim on as a guest. A violent encounter on the New York subway, revenge against unkind colleagues and complete clown anarchy in the streets of Gotham converge in this journey into the mind of Arthur and his transformation into Joker.

The supporting cast couldn’t be better, and that includes De Niro and Frances Conroy as Arthur’s mother, along with many others along the way. This movie will have you reeling – and thinking. In a country of seemingly weekly mass murders at the hands of someone with a gun, this comic book origin tale of Joker is a must-see.

Producers are Phillips, Bradley Cooper and Emma Tillinger Koskoff. Warner Bros releases it October 4. Check out my video review at the link above with scenes from the film.

Do you plan to see Joker? Let us know what you think.