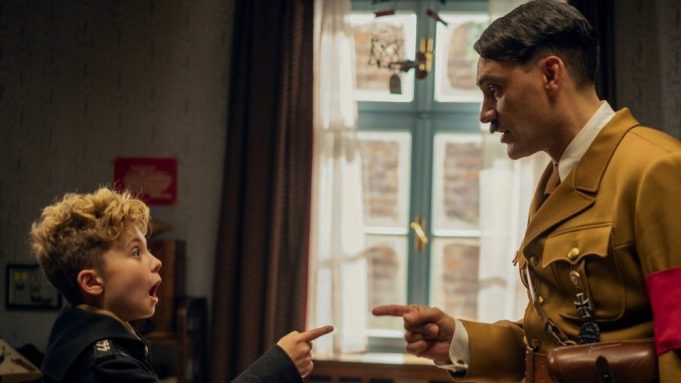 “Nazis weren’t cool when I wrote it,” joked Jojo Rabbit filmmaker Taika Waititi about making and releasing his Adolf Hitler comedy in the current divided political climate, one where white supremacists have become some of President Donald Trump’s more ardent supporters.

“People weren’t into this sh*t when I wrote it, and now it’s just developed and suddenly weirdly relevant,” says Waititi, who was first turned on to Christine Leunens novel Caging Skies by his mother some years ago.

The film follows a young German boy, Jojo Betzler (Roman Griffin Davis), who is a devotee of the Hitler youth, so much that his imaginary friend is a funny Fuhrer (Waititi). Jojo’s mother, Rosie (Scarlett Johansson), is harboring a Jewish fugitive (Thomasin McKenzie) which challenges the boy’s brainwashed beliefs.

No, Jojo Rabbit isn’t Oliver Hirschbiegel’s Downfall. It’s a movie about finding humanity in chaos, and the decimation of stereotypes, with Waititi’s sense of humor woven in. Critics were divided coming out of TIFF, believing that Waititi was joking too close to the fire, but festival audiences disagreed today, bestowing their Oscar Best Picture bellwether, the Grolsch People’s Choice Award, upon Jojo Rabbit; an award won by such films as Green Book, The King’s Speech, 12 Years a Slave and American Beauty which found themselves months later with awards season’s top prize.

As Deadline’s awards guru Pete Hammond reported, the reception for Jojo Rabbit at it TIFF world premiere was rapturous. Word of mouth will be this pic’s best friend when it opens limited from Fox Searchlight (under its new parent Disney) on October 18.

Says McKenzie on how Jojo Rabbit organically wags a finger at the current climate, “That happens quite a lot, I find, where films come out and they weirdly reflect or are like a mirror to what’s actually going on in the real world. Which is why, for me, film is such an important medium. Because people are able to see things from a different perspective, and think about them in a different way. So in that kind of way, film is such an amazing piece of magic or treasure that is really valuable.”

When it comes to playing Hitler, Waititi says, “I didn’t feel that uncomfortable, other than having to see myself in a mirror. But apart from that, I don’t want to say that I enjoyed it.”