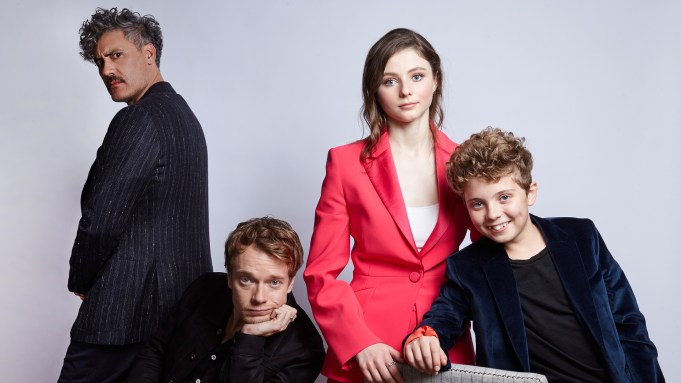 Taika Waititi’s Jojo Rabbit, a coming-of-age comedy set in World War II Germany featuring Waititi himself in the role of Hitler, is the director’s follow-up to surprise hit Thor: Ragnarok. It began its U.S. rollout this past weekend, opening in New York and Los Angeles to a frame-leading per-screen average of $70,000.

Stopping by Deadline’s The Contenders London recently with producer Carthew Neal and cast members Roman Griffin Davis, Thomasin McKenzie and Alfie Allen, Waititi recalled that the project began in 2010 with a book, Caging Skies by Christine Leunens, that his mother was reading.

“I read the book, and it had the story of this boy who was indoctrinated into the Hitler youth, and discovers that his mother is hiding a girl in their attic—and, because he’s never seen a Jew before, all he has in his mind is the stuff from propaganda and the books that they gave to children. In his mind, it’s basically a monster in the attic, so he’s trying to figure out what to do about this monster. Then, I went and added a little bit more of humor here and there.”

Waititi’s appearance as Hitler, the child’s imaginary best friend, was a move that has been controversial to some, if not the director. He noted, “Someone the other day said, ‘Wow. You know, that’s pretty bold, putting humor with this subject matter,’ and I said, ‘Yeah, I know. Because it’s only been 80 years since [Charlie Chaplin’s film] The Great Dictator…’ You know, it’s necessary to keep telling these stories in new and inventive ways, to keep ourselves interested, to keep the stories alive, and to keep the overall message true, which is a message of tolerance, and acceptance, and love.”

To find out more from the Jojo Rabbit team, check out the conversation above.