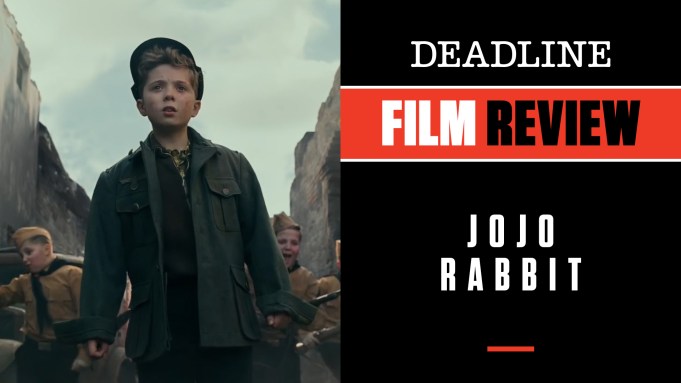 Charlie Chaplin did it in The Great Dictator. Mel Brooks and Jack Benny did in their respective versions of To Be or Not to Be. Brooks also wrote and directed the most hilarious send-up of all with his “Springtime for Hitler” production number in The Producers. And Hogan’s Heroes even did it for six seasons in the 1960s CBS sitcom. These are just a few examples of using Nazis and Adolf Hitler as the setup for fun and, yes, pointed satire that makes its points while getting laughs.

But is it still funny in an era where neo-Nazi sentiment is on the rise? Director-screenwriter Taika Waititi takes on that risk and challenge in his new comedy Jojo Rabbit and succeeds admirably with a film that will amuse you but, more importantly, reminds us of the idiocy and horrors of Hitler and his ilk. This is particularly aimed at a young generation that might not have what happened in Nazi Germany in World War II front of mind but should be taught to never forget or risk history repeating itself. For my money, Waititi and this film could not have come at a better time, and not a minute too soon.

The reaction at its Toronto International Film Festival premiere was through the roof, and ultimately it won the all-important People’s Choice audience award there, the same one Green Book took on its first stop to winning the Best Picture Oscar. Could it happen for Jojo? Time will tell. It’s an oddball movie, and not the typical Oscar bait, but audiences who love it really seem to love it. But you can expect walkouts from those who are offended or can’t see what the director is really going for here. It might be an acquired taste but one I hope people give a chance. Waititi has proven in small gems such as What We Do in the Shadows and The Hunt for the Wilderpeople, and on a large scale in Thor: Ragnarok, that he has a special talent for the offbeat style of humor that is so rare these days. Jojo Rabbit is his best yet.

Set in the last year of WWII, the story centers on a young boy named Jojo (Roman Griffin Davis), who got the nickname Jojo Rabbit after he refused to kill a rabbit in front of his classmates and Nazi officers in the German town in which he lives. Jojo is trying to fit in, to be a good budding Nazi like everyone else, but it isn’t easy for a kid who really isn’t cut out for it in his heart, but he doesn’t know better. His mother Rosie (Scarlett Johansson) isn’t marching to the Hitler drum and actually is actually hiding a Jewish girl named Elsa (Thomasin McKenzie) in their house, something he discovers and knows will get them in trouble if found out. To add insult to injury, she keeps stealing knives he has to kill her. Laughing yet?

Actually the deft way Waititi lays out his story is worthy of Billy Wilder at the top of his game, and it is ratcheted up when Jojo invents an imaginary friend a la James Stewart and his rabbit Harvey. But this one is a bumbling idiot named Adolf Hitler, the role Waititi cast himself in (probably because it might have been hard to find an actor willing to play it). This “imaginary” friend is made out to be an imbecilic fool, offering up the worst possible advice to Jojo. As the story proceeds, Jojo, with the help of scene-stealing buddy Yorki (Archie Yates, terrific), eventually discovers that maybe the Nazi cause isn’t all it is cracked up to be. There are lessons to be learned here, and Waititi creates a crackerjack satire to lure his audience in to realize some important things are being said in this highly original and entertaining comedy.

Davis is superb as Jojo, certain to rack up every breakthrough child actor award there is this year. Johansson gives a pitch-perfect turn as well. McKenzie, a New Zealand native, is lovely in the role of Elsa, and the town’s moronic Nazi brigade includes Rebel Wilson, Sam Rockwell, Stephen Merchant and others who get the laughs at the expense of their monstrous characters. Waititi nails Hitler in a way the Fuhrer certainly would certainly not like to be remembered. He might make you cringe, but it is worth the ride. Jojo Rabbit is a winner.

Producers are Chelsea Winstanley, Carthew Neal, and Waititi. Fox Searchlight is going to roll this out slowly and let it catch on. Satire on this level isn’t always easy to sell but it is well worth the effort. It opens Friday. Check out my video review at the link above with scenes from the film.

Do you plan to see Jojo Rabbit?  Let us know what you think.