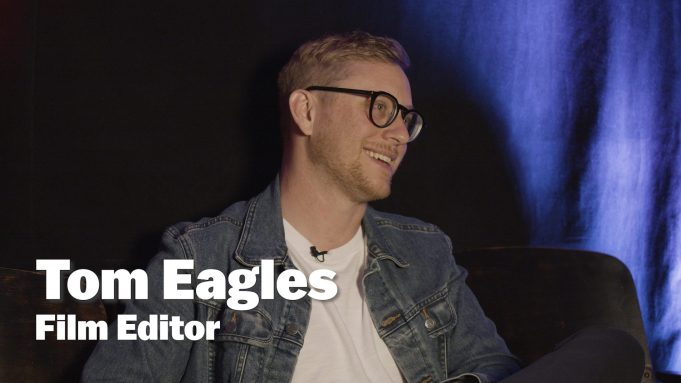 For Tom Eagles, the editing of Jojo Rabbit felt like a precarious tightrope walk, all the way through.

“We knew that we had to establish humor up front, because humor [is] an integral part of Taika [Waititi]’s filmmaking. But it’s also integral to this film, to re-engaging people with a subject matter,” the editor says, in the latest installment of Deadline’s Production Value video series. “It kind of opens a door for people and loosens them up, and allows them to think about things in different ways. So, we always knew that humor was important, but we had to give people permission to laugh.”

Nominated for two Golden Globes, Waititi’s ‘anti-hate satire’ centers on Jojo (Roman Griffin Davis), a young German boy who becomes an avid member of the Hitler Youth during World War II, joined everywhere he goes by his imaginary friend, Adolf Hitler (Waititi). Discovering that his mother (Scarlett Johansson) is hiding a Jewish girl (Thomasin McKenzie) in the attic, the boy finds that he must ultimately choose between love and hate.

While Jojo Rabbit had its share of “high comedy,” what resonated with Eagles is that the film was much more nuanced than that, becoming “a quite heartfelt drama by the end,” he explains. “But it was a constant balancing act, all the way through the edit. We were constantly recalibrating, taking jokes out, adding jokes back in. How much humor was too much? How much darkness was too dark?”

“We had all the material if we’d wanted to make just a straight-up comedy that was a gag a minute,” Eagles adds. But the deeper the film’s creatives got into the story, the more they wanted to focus on the relationship between Jojo and Elsa, the feisty, whip-smart Jewish girl, who works to change Jojo’s worldview.

“I think probably, the thing that I’m happiest with is the kind of emotional charge that people seem to leave the theater with. Every time I watch it with a big crowd, it’s an amazing feeling at the end of the movie,” the editor shares. “I think that was something we always had our eyes on, and it was sometimes a slow process getting there. But I think we got there.”

Admittedly, Eagles didn’t quite know what to make of Jojo Rabbit, when Waititi first told him about the film. “He’d been talking about the project for a long time, but I didn’t read the script until much, much later,” he says. “So, it just seemed like this kind of preposterous, audacious idea to me, until I read the script.”

What sold the editor on the piece was the ability to see the world through the eyes of Jojo, a young boy like any other, whose imagination happens to have been corrupted by the propaganda that he sees all around him. “He has this very naïve, I want to say innocent sensibility,” says Eagles, “even though he’s a fanatic.”

For a look at our conversation with the editor, who just yesterday received his first ACE Eddie nomination for his work on Jojo Rabbit, click on the video above.