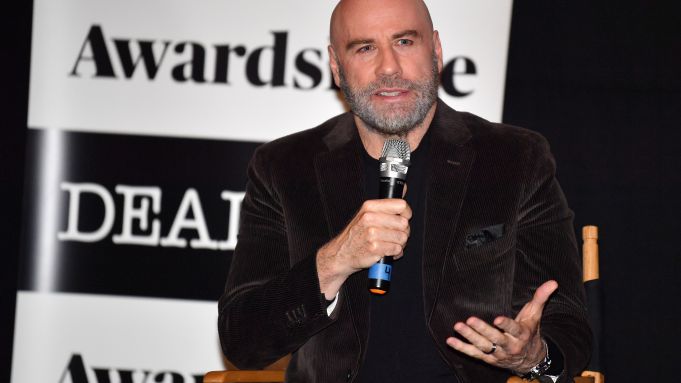 Playing the title character in The Fanatic, John Travolta recalled, meant going down the rabbit hole of movie fandom, a notion he has been acquainted with since his childhood worship of Jimmy Cagney.

Moose, the film’s lead character, is a passionate but troubled superfan who winds up in a real-life showdown with his favorite action star after an autograph pursuit goes awry. On the spectrum but never diagnosed on screen, Moose crosses boundaries when pursuing his hero, Hunter Dunbar (Devon Sawa), pushing the story into full-blown thriller territory.

During a Q&A after an Awardsline screening of the film at New York’s Landmark at 57 West, the actor recalled staying in character anytime he was on set. “The crew loved Moose,” he said. “They’d say, ‘Hey, Moose! See any good movies lately?”

Travolta’s four-plus decades in the Hollywood spotlight have shown him every aspect of fame. When he first read the script a decade ago and began talking about the project with writer-director Fred Durst (who got to know celebrity himself, as the lead singer of Limp Bizkit), the characters resonated. Travolta also felt the story was timely, given the surge of interest in show business and its trappings in recent years. (The story’s epicenter is Hollywood Boulevard, with its admixture of autograph hounds, tourists and costumed performers hustling for a buck.) “It could occur in any other decade, but it’s certainly reflective of what’s happening today,” Travolta said.

The actor’s career has featured plenty of costumes and props that have been trafficked along the Boulevard, from the white suit of Saturday Night Fever to the leather jacket of Grease to the black suit of Pulp Fiction. But he said he long ago gave all of the keepsakes away. “There are a dozen things I wish I’d kept over the years,” he said, quipping that “Jane Fonda has my white suit.” But, he added, “I’ve always felt that if you have something that might be more significant to another, their owning it means more to them than your owning it.”

The conversation covered ground well beyond The Fanatic, despite the praise in many corners for Travolta’s performance. The audience at the Landmark was clearly a partisan group — one front-row fan had tattoos of Travolta in Grease as well as Pulp Fiction and another duo were relatives of the prop master on Saturday Night Fever, James Mazzolla. When Travolta learned Mazzolla had died in 2018, he offered lengthy and sincere condolences. “He was always there for me. He helped me so much and I loved him,” the actor said. Travolta’s lead performance in the 1977 film earned him an Oscar nomination.

When Mazzolla’s nephew, an acting student, asked what Travolta did first when working on a character, he said any portrayal results from an accumulation of observation and instinct. “There’s nothing more valuable than falling in love with a scene, a sentence, a word,” he said. “I don’t care what it is. A walk, a talk. A look. If you gravitate like a magnet toward what you love, then it builds and you arrive at this thing that you’ve created.”